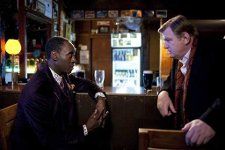 This year's Edinburgh International Film Festival opened with Irish cop comedy drama The Guard on June 15 and will run until the 26th. The 65th EIFF brought together filmmakers from all around the world with a focus on independent work.

It included a strong short film strand featuring unusual experimental work, and this year there was a science strand with famous scientists attending to explain to audiences how what you see in the movies might work in real life. There were 60 UK premieres and despite the lack of red carpets this year a number of celebrities were in attendance.

You can find links to our reviews, interviews, behind the scenes gossip and exclusive photos below.

Jitters
A refreshing coming of age story which plays like an Icelandic Skins.

Perfect Sense
A chef and an epidemiologist fall in love, just as the world is falling apart.

Tomboy
Ever wondered what it would be like to switch sex? Laure, 10, does.

Food
With sustenance running short, people start to look around for new things to eat.

You Are Not I
The director's long-lost debut, described by Cahiers du Cinéma as one of the best made movies of the 1980s.

Page Eight
An MI5 agent becomes embroiled in intrigue after the death of his boss.

The Lion King 3D
A guilt-ridden lion cub goes on an adventure. Reissued in 3D.

Let Us Be Golden
Three acts. Three sounds. Three attitudes. One goal – a career in music.

Magic
A glimpse into the lives of a troupe of stage magicians trying to keep the magic alive.

Hooked
A mixed-heritage woman falls out with her resentful white mother on a turbulent housing estate.
A-Z of Edinburgh International Film Festival 2011 reviews >>>

Nim remembered
Bob Ingersoll talks about his friendship with the chimp at the heart of documentary Project Nim.
Redhead rampage
Director Romain Gavras talks about Our Day Will Come.
Building A Better Life
Director Chris Weitz talks about his immigrant father and son drama.
Convento and the uncoventional
Director Jarred Alterman and artist Christiaan Zwanikken talk about making their documentary with a difference.
Bombay Beach dreams
Alma Har'el talks about collaboration and dance in her debut documentary.
The scent of John Waters
Polyester shows in Odorama at EIFF.
Adapt and survive
Ryan Redford, director of Oliver Sherman, talks about his movie, being broke and seeing ghosts.
From the horse's mouth
Legendary director Bela Tarr discusses his latest and final film.
Edinburgh Film Festival opening gala
The Guard marks low-key start for showcase.
The changing face of Edinburgh
James Mullighan talks about the challenges he faced in reshaping one of the world's biggest film festivals.