Bob Ingersoll talks about his friendship with the chimp at the heart of documentary Project Nim. 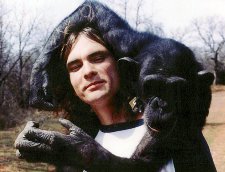 Bob Ingersoll with Nim back in the Seventies

Although Rise Of The Planet Of The Apes is likely to be grabbing most of the headlines as it opens this weekend, there's another film concerning communication with primates that's equally compelling - not least because it is a true story. James Marsh's documentary Project Nim - which premiered at Sundance Film Festival earlier this year - recalls the life of chimpanzee Nim, who, in 1973, was taken from his mum at just a couple of weeks of age as part of an experiment by scientist Professor Herbert Terrace to find out if chimpanzees could learn to communicate with humans through sign language.

The tale proves a turbulent one, as Marsh leads us through the life of the chimp by way of first-person testimony and footage from the time. Among those who had contact with Nim is Bob Ingersoll who, in 1973, was a student of primate studies. Unlike many of those who surrounded Nim, Ingersoll accepted him and interacted with him largely on the chimp's own terms, rather than viewing him as some sort of experiment. Almost four decades later, Ingersoll is as passionate about primates as he ever was, and on the day I meet him during Edinburgh Film Festival, the easy charm he displays in Marsh's documentary is very much in evidence and easy to warm to.

He says he was surprised when he was first approached by author Elizabeth Hess to participate in her book Nim Chimpsky: The Chimp Who Would Be Human - which would go on to be a huge success in its own right and to inspire Marsh's film. Although Ingersoll didn't want to get his hopes up initially, when he first heard the story might be turned into a documentary, watching Marsh's previous film Man On Wire with his wife, led to him becoming committed to the project.

"I was praying as we walked out of the theater that it would fall together," he said.

"James called me and I told him I wanted to do it or at least entertain the idea but I said, 'I need to speak to you in person'. So he flew from Copenhagen to my house in San Francisco, pretty much in a few days. I was impressed. Then when I met him, I was really impressed. Besides being a very genuine and nice guy, he knows his stuff and he knew his stuff when he came to talk to me - he was extraordinarily prepared."

But although he was onboard from the outset, that didn't mean that Ingersoll wasn't nervous about talking about his relationship with Nim and the others involved with the chimp on camera.

Ingersoll talks about Nim as his "best friend" and it's clear that he still cares as passionately now as he ever did about animal welfare - and specifically about primates. He is the president of Mindy's Memory Primate sanctary - which aims to provide a humane environment for animals, particularly monkeys which he says are "the least-served of all the non-human primates", giving them care and aiming to educate the public about them. And although he still sports long hair that might suggest he has something of a flower-power looseness to his stance, Ingersoll's attitude towards animal welfare is fiercely practical.

"I realise chimps aren't humans and they're three to seven million years different in terms of evolution," he said.

"As an evolutionary biologist I see chimps as a window into the past and a window into the way into the way we became humans. We have a lot of the same kind of stuff in us that they have and we have a common ancestor - that to me is what's interesting. Not necessarily that chimps are 'humans' or that they can do sentences or grammar or syntax. To me, it's more interesting that they are equipped to be able to at least learn a sign to name objects and to use verbs and that's interesting to me in that that's how language kind of started. We've only been speaking, some people say 400,000, some say only about 250,000 years. So there's four million years there when humans weren't speaking and they were probably communicating in non-verbal ways, just like chimps. We've come a long way.

"I think that being a chimp is equally deserving of the respect and dignity of any other animal or any other being. Because now we can use the term 'being' for other animals, which we couldn't use in 1973 because it was frowned upon. I like to think we can take chimps and give them chimp rights and elephants and give them elephant rights and respect them for who they are and what they are. Hopefully, this is like a tipping point in the sense that the public is going to understand that. Because this whole thing of giving chimps human rights and all that doesn't seem like it really fits to me.

"In America, in the animal rights community, there's a lot of talk about giving animals 'human rights'. But I think animal rights should be more specific to each individual animal. So that's a kind of muddled area."

Ingersoll's dedication has showed no sign of flagging down the years.

"Once you get into this, it's hard to get out," he admitted. "They need my help so badly, if I don't do this I wouldn't feel right about myself."

But the primate expert knows the importance of sticking to his guns for the long haul. As Marsh shows in the film, there was a period when he wasn't allowed to visit Nim at the Black Beauty ranch where he was being kept, but he just kept on trying from every angle until he managed to persuade the ranch manager to give him access without the knowledge of those higher up.

"Everything takes a long time if it's this complicated," he said. "But I'm patient."

And Ingersoll is optimistic about primate welfare and the strides that have been made in the past three or so decades.

"Things have got better," he says. "The Black Beauty Ranch, for example, after Nim passed away, they knocked down that cage and built a great big new outside enclosure. Chimps go out on grass now, so the chimps that I moved there - Kitty and Lulu and Midge - they all have a beautiful enclosure with grass and it's much more natural and much more like we had envisioned. But I always thought they would get to that point.

"It's expensive to do this, so there's a budget involved and they have hundreds and hundreds of other animals, so it takes some time to do the right thing. Everything that's worth doing is worth taking your time and doing right. It's what I call baby steps but those baby steps get you a long way over 30 or 40 years. It's not going to happen overnight.

"This movie's another part of the puzzle, another part of the tipping point. It gives the public another point of access. So they can see the film and it's in their conscious when it wouldn't have been otherwise - so we can hit millions of people instead of thousands. A newspaper article or a TV show only gets to so many people. And when you have artists like this - I mean, I consider these guys to be at the highest end of the art world in terms of film - it feels like Picasso and Marie Curie, the salon kind of a thing.

"I like this approach because I always have worked with artists in this because the scientists wouldn't talk to me and usually the animal rights people won't talk to me and the lab people won't talk to me because I'm trying to get everyone to get together and they just don't see their way to do that yet. The way I feel is, no one likes me, I'm doing the right thing. But sometimes it's hard to put your swords down and have a cup of tea and not be so angry at one another. I'm hoping people will see me in a different light in the sense that I just want to get along with everybody and do the right thing. And I don't think that's hard. It's not hard to make that decision. It's hard to do the right thing and it's expensive but it's not hard to make the decision. There's a difference between the decision and the doing. You can sit around and talk about it all day long but when you want to do it you've just got to get up and do it."

You can see how Ingersoll got up and did an awful lot for Nim and his chimpanzee pals in Project Nim, which is out on general release in the UK now. For more information about the film visit the official website.

Stay-At-Home Seven: September 14 to 20 This week's selection of films to catch on TV and streaming services