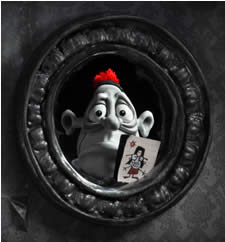 Mary And Max opened the festival

The daddy of all independent festivals reaches its quarter century in 2009. Run in conjunction with the Sundance Institute - set up by Robert Redford to support independent film - it has continued to develop its brief. It championed documentary which has resulted in a slew of factual films hitting the multiplex and has recently turned its attention to short film.

The 2009 edition will open with the world premiere of claymation film Mary And Max.

Got a feature or short film screening at Sundance 2009 and want us to review it? Or have you an event we should attend? Feel free to get in touch with us.

We'd like to say a huge thank you to Alamo for helping Eye For Film out with our car hire again this year. For over 30 years, Alamo Rent A Car has been a market leader for leisure travellers to North America. With a network of nearly 300 branches across America, an industry-leading fleet and Alamo Choice enabling renters to select their own car from all those available within a group, Alamo is the first choice for travellers. Choose Alamo Gold for a full tank of petrol and up to three additional drivers. One-ways are free of charge throughout Florida and California and, for a real American adventure, get off the beaten track with the latest GPS model available from most US Alamo branches. With Alamo, the journey is as much fun as the destination. We have teamed up with Alamo to offer 10% off USA car rental. Simply visit www.alamo.co.uk/usadiscount or call 0870 400 4596 quoting ‘discount’.

575 Castro St
A light and motion study accompanying a tape recording by Harvey Milk to be played "in the event of my death by assassination".

Knife Point
An evangelical family offers a traveling knife salesman a ride on their way through upstate New York.

Protect You + Me
A meal with mum turns sour.

When You're Strange
Documentary tracking the rise of The Doors, featuring rare footage of the band and Jim Morrison.

Lymelife
Set in the 1970s, a unique take on the dangers of the American dream seen through the innocent eyes of a 15-year-old boy.

World's Greatest Dad
A comedy about a high school poetry teacher who learns that the things you want most may not be the things that make you happy.

Moon
An astronaut starts to lose the plot at the end of a mission to the moon - but is there something else going on? Plus read our exclusive interview with Duncan Jones

I Love You Phillip Morris
Having learned to lie about his sexuality, Steve finds he just can't kick the habit, even after he comes out and falls in love.

Old Partner
Documentary about an elderly farmer, his wife and their loyal ox.
A-Z of Sundance Film Festival 2009 reviews >>>