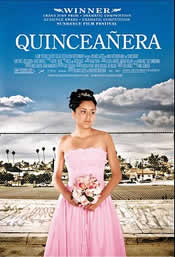 Echo Park, LA won both the Dramatic and Audience Awards

A good year for festival hits, one film that certainly made it big on the world stage after premiering at Sundance 2006, was Little Miss Sunshine. Of the homegrown films Quinceañera - about Latino kids coming of age in LA - took home the Grand Jury Dramatic Prize, while Sudanese documentary God Grew Tired Of Us, won the Grand Jury Documentary Prize, they also scooped both domestic Audience Awards.

Factotum
Portrait of the drinker as an artist.

'Tis Autumn: The Search for Jackie Paris
Documentary about "the greatest voice you never heard".

The Foot Fist Way
Comedy kicks in the life of a tae kwon do teacher.

Gruesome
An infernal Groundhog Day as a student seems destined to relive the day of her murder.

Wristcutters: A Love Story
A young man kills himself and awakens in a land where everything is "just a little bit worse".

Stranger Than Paradise
An unlikely trio head for Florida in search of paradise.

Wild Tigers I Have Known
Sexual awakening of a teenager who tries to engage with the object of his affections by posing as a woman on the phone.

One Last Dance
An assassin hunts a child-kidnapper.

A Little Trip To Heaven
An insurance investigator probes the suspicious death of a conman whose sister and dodgy hubby inherit $1million after his demise.
A-Z of Sundance Film Festival 2006 reviews >>>

Sundance : Day Ten
The final day of the festival, and we catch up on two movies; and the Sundance awards.
Sundance : Day Nine
The final day of press screenings, and Amber dips her toes into some of the higher profile releases. Runaway laundry over Justin Timberlake's debut?
Sundance : Day Eight
Early morning wakeup calls, discussing KZ with director Rex Bloomstein; The Night Listener and Art School Confidential are the movies of the day.
Sundance : Day Seven
A short reminisce on the sheer volume of new and exciting cinema that is largely ignored by the press at Sundance; and the powerful drama Journey From The Fall.
Sundance : Day Six
The Sundance slimming plan (patent pending..), and interviewing Paul Laverty and Clive Gordon on their new film Cargo.
Sundance 2006 : Day Five
Mascara worries do not faze Amber on her fifth day of Sundance! Indeed, the best film of the festival thus far awaits... And the search for a Bud may be the toughest challenge, yet.
Sundance : Day Four
Amber interviews cast and director of Lucky Number Slevin, enjoys the hospitality of the Sundance Institute, as well as snagging her first goody-bag!
Sundance : Day Three
Nosebleeds, technological SNAFUs, and soaking up the atmosphere - along to the sentimental tones of Rufus Wainwright. And another three movies!
Sundance : Day Two
Three movies a day never gets old, but late-night wine and DVD screeners soothe Amber's exhausted nerves.
Sundance 2006: Day One
Day One: Amber checks out the keynote speech, and gets used to the freezing cold and alcohol-free parties.
Sundance 2006 Preview
A strong lineup for this year's Sundance, let EyeForFilm guide us through it..