We talk to Sophie Barthes about her inspiration for feature debut Cold Souls. 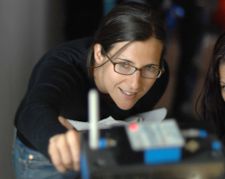 Comedy drama Cold Souls tells the story of an actor - Paul Giamatti playing a 'fictional' version of himself - who decides to put his soul in cold storage... but when he has second thoughts, he discovers getting it back may not be as easy as he thought. The film, which co-stars Dina Korzun and David Strathairn, is released on DVD this week and we caught up with writer/director Sophie Barthes to talk to her about her imaginative feature debut and her plans for the future.

Can you tell us about the inspiration for Cold Souls?

The idea came from a very strange and funny dream I had three years ago. I had recently seen Woody Allen's Sleeper and just finished reading Carl Jung’s Modern Man In Search Of A Soul. Some strange synaptic connection must have happened in my brain. In the dream, I am waiting in line in a futuristic office. I am holding a box, like everybody else in line. A secretary explains that the box contains our extracted souls. The doctor will examine it and assess its problems. Woody Allen is also in line, just in front of me. When his turn comes, he opens his box and discovers that his soul is a chickpea! He is furious. At this point, I feel extremely anxious. I look down at my container but the dream ends.

The premise suggests you have been around a lot of angst ridden stage performers in your time?

Not really, I think anxiety is part of the creative process. The main character could have been a writer, a painter, a musician, etc. Maybe my own anxieties are channeled through this character too.

How difficult was it encouraging Paul Giamatti to play "himself"?

Actually Paul liked very much the idea of playing himself. The idea was to be playful with the audience. As an audience we think we know actors and they belong to us because we spend a few hours in their company on screen. Whether they like it or not, actors have a persona.

Did that present any problems, for example, if he thought he wouldn't behave in the same way as his character in the film does?

How much of that character IS Paul?

Difficult to say! I would say that Paul Giamatti and the character share a certain vulnerability and sensibility. Paul comes across as the quintessential neurotic New Yorker. But in reality he is much different. He is much less neurotic and has an incredible sense of humor.

You seem to have a great feel for New York for an outsider, how did you manage that?

I love New York. I’ve been living here for ten years now. It’s a city of extremes. You have to be a little bit nuts to live here but once you get used to it, it’s difficult to imagine life somewhere else.

The contrast of New York and St Petersburg is interesting, how did the shooting conditions match up?

Shooting in Russia was actually really easy. The local production company, Globus Films, was really professional. We brought some key creatives from the US but the rest of the crew was local and they did an excellent job. It was actually colder in New York than in St Petersburg. We weren’t expecting Russia would be so easy. St Petersburg is a city that grows in you, it’s very charming and strange.

I very much enjoyed the visual humour was that all scripted (the baby, the bunny) or improvised as you were filming?

We didn’t have much room for improvisation (tiny budget and tight schedule!) so almost everything was in the script.

For a film with science fiction overtones, it is effects-light was that a conscious decision or would you have had an effects spectacular if budget had allowed?

The idea was to make a lo-fi film. The Soul Storage could exist in New York today. It’s just the idea that we already live in a pretty surreal world. I was inspired by Jean-Luc Godard’s Alphaville - I like the idea that everything in the film was hand made. The Soul Extractor machine, for instance, was built by an artist friend of mine, Eric Lahey. He made it in his garage in Portland, Oregon, with his brother. I think it took them more than 40 days to complete the machine. Then they had to drive across the US with a Souls Extractor in a truck to bring it to New York. I also love sci-fi films like Blade Runner.

If you opened your own soul box, what do you think you would find?

Well in the dream I opened the box but I didn’t have time to see the shape of my soul. The dream abruptly ended… What is that supposed to mean? What would CG Jung have to say about that?

Do you have a next project lined up or a dream project you'd like to tackle?

Well I just had a baby six months ago, so it feels as if all my brain cells have gone into the breastmilk! I couldn’t think straight until now. I’ve started writing again recently. I have another idea for a sci-fi film and I’m interested in some book adaptations.

Cold Souls is out on DVD now. Buy it from Amazon here

Animosity Cousins The Croods: A New Age Deerskin A Good Woman Is Hard To Find Here After I Never Cry Kandisha Night Of The Kings Nowhere Special Off The Rails Plurality Summer Of Soul (...Or, When The Revolution Could Not Be Televised) Two Of Us The World To Come

Ailey The Boy Behind The Door Kandisha Nowhere Special Off The Rails The World To Come Cousins Here After Invisible Demons Deerskin Plurality A Radiant Girl The Sound Of Silence River Babi Yar. Context Animosity State Funeral Nobody The Hidden Life Of Trees Black Widow