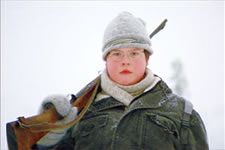 Sundance is the daddy of all independent festivals. Run in conjunction with the Sundance Institute - set up by Robert Redford to support independent film - it has continued to develop its brief for more than two decades. It championed documentary which has resulted in a slew of factual films hitting the multiplex and has recently turned its attention to short film, recently announcing a mobile phone pilot project.

We'd like to say a huge thank you to Alamo for helping Eye For Film out with our car hire again this year. For over 30 years, Alamo Rent A Car has been a market leader for leisure travellers to North America. With a network of nearly 300 branches across America, an industry-leading fleet and Alamo Choice enabling renters to select their own car from all those available within a group, Alamo is the first choice for travellers. Choose Alamo Gold for a full tank of petrol and up to three additional drivers. One-ways are free of charge throughout Florida and California and, for a real American adventure, get off the beaten track with the latest GPS model available from most US Alamo branches. With Alamo, the journey is as much fun as the destination. We have teamed up with Alamo to offer 10% off USA car rental. Simply visit www.alamo.co.uk/usadiscount or call 0870 400 4596 quoting ‘discount’.

I Always Wanted To Be A Gangster
Existential comedy told in four vignettes linked by a roadside cafe.

Momma's Man
A man in mid-life crisis retreats to his parents' loft.

Frozen River
Two women enter an uneasy partnership to smuggle illegal immigrants from Canada to the US.

Trouble The Water
Personal story of a rap artist and her husband who lived through Hurricane Katrina.

Gonzo: The Life and Work of Dr. Hunter S. Thompson
A documentary tribute to the legendary creator of gonzo journalism.

Choke
A sex-addicted med school dropout pays his mum's hopital bills by running a restaurant scam... but with her memory fading fast, will he ever find out the truth about his dad?

The Betrayal
The epic story of a family forced to emigrate from Laos after the chaos of the secret air war waged by the US during the Vietnam War.
A-Z of Sundance Film Festival 2008 reviews >>>

Twisting time
Director Nacho Vigalondo talks exclusively about his mind-bending feature debut Timecrimes... and the upcoming Hollywood remake.
All fired up
Director Sharon Maguire on the impact of terrorism in the modern world - envisioned in her latest film Incendiary.
Giving British films some Punch
Donkey Punch director Olly Blackburn and cast Jaime Winstone, Sian Breckin and Nichola Burley talk about the film.
No laughing matter
Producer Chris Coen talks about remaking Funny Games.
Plight of the living dead
As Diary Of The Dead is released on DVD read our exclusive interview with George A Romero about zombies, the perils of the internet and a Sound Of Music remake.
Sundance 2008: Awards ceremony
British films triumph in short and documentary sections, plus all the other winners and a brief word with Quentin Tarantino.
Sundance 2008: Day Eight
Hamlet 2 is hilarious, Triage hard-hitting and Ballast a let down, plus a chat with Marianna Palka.
Sundance 2008: Day Seven
A kick out of Donkey Punch, excellent doc Man On Wire... plus gay porn zombies.
Sundance 2008: Day Six
Funny Games no laughing matter, Brian Cox is The Escapist and more Good Dick.
Sundance 2008: Day Five
The terrific Towelhead, Spurlock's search for Bin Laden, filmmakers' panel on black filmmaking and more.
Sundance 2008: Day Four
Sean Ellis on The Broken, plus films including Red, Incendiary, Mancora and Phoebe In Wonderland
Sundance 2008: Day Three
An Incendiary chat with Sharon Maguire, why Good Dick is great and a break down of The Broken.
Sundance 2008: Day Two
Keaton's Merry Gentleman, a Brit of Frost & chat with Romero.
Sundance 2008: Day One
Frustration, a flurry of films and George A Romero introduces Diary Of The Dead.
Sundance Film Festival 2008
Buckle up folks, here we go - looking forward to a week of films and savouring the stress.