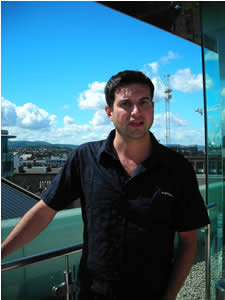 When it comes to making a debut feature film, the horror genre has always held a lot of appeal. With confined spaces a boon for scary goings on, minimal sets can often aid and abet a tight budget. But despite Donkey Punch being shot for just £1 million, director Olly Blackburn opted for confinement with a high price tag – a luxury yacht.

It's here that mayhem ensues when three Yorkshire lasses' idea of a fun-filled sunshine break gets bent out of shape when some 'up for it' boys offer to show them a good time out on the ocean waves. It isn't long before drugs, drink and a nasty sex act leave Kim, Tammi and Lisa (Jaime Winstone, Nichola Burley and Sian Breckin) all at sea.

Yet despite budgetary constraints and the difficulties always brought on by shooting in the sea – remember Waterworld, anyone? – Olly has created a distinctive and glamorous look that belies the fact that the entire film was shot in less than a month. When I catch up with him at the Edinburgh International Film Festival he admits the first rule of filmmaking is "do not shoot on water" but adds that his experience of turning out music videos helped him to achieve results fast.

"Shooting was intense, very fast, and quite incredible," adds Olly "We had so much ground to cover every day it stopped being ridiculous after a while. We had 24 days to shoot people getting burned alive, hanged, firing flares, using knives, getting thrown off the boat into the freezing sea, at night."

Despite being set in Spain, the movie was actually shot off the coast of South Africa. This meant the cast were together for the duration of the shoot – helping them to create a realistic bond. And even as the body count began to mount, all the actors remained throughout the filming.

"The really interesting part about making the film was that Olly shot it as much as possible in sequence," says Sian.

"When films are shot out of sequence it can be very hard to get your head around, but this was much more a natural progression. We actually only saw the boys when they came into the bar for the first scene, it really was like meeting these guys for the first time.

"The way the accommodation was set up meant the three girls stayed together and the boys were together, so our relationships became stronger and after a while it was like we'd been friends for years."

Jaime adds: "Considering it's a psychological thriller, the filming was a very psychologically intense experience. Seven young actors on a yacht, at times covered in blood, in the middle of the dark waters of South Africa, where we were sometimes shooting really long hours to get scenes done.

"There was a buzz, an excitement to be part of this project, and a really talented young cast. We're all around the same age and the same stage of our careers, so there was this really natural organic vibe on set."

It's testimony to their acting abilities and friendship that they managed to achieve so much with so little. And the fact that Olly had a real hands-on attitude to the whole process certainly seemed to help. Chatting the girls before their film received its UK premiere at the EIFF, they revealed they had been rather nervous about jumping into the water - especially since rather than the sun-kissed waters of the Med it was the cold Atlantic. But in the spirit of never asking his cast to do anything he wouldn't, Olly was happy to take the plunge first.

"It was freezing," says Sian. "A really great thing that happened was that we were, stood ready to go in the water and I was feeling really nervous about it. I just said to Olly, ‘Well you do it, you get in the water,” because he had just told us to do it, and he just stripped off his T-shirt and jumped straight in. And I thought, ‘Well, you’re leading the way, aren’t you? I want to do it now’. He was like that through the whole film, he was so inspiring and energetic."

Nichola adds: "At one point we were anchored between two seas, one of which, the Atlantic, is very cold.

"We had medics on board who told us that if you were in the sea for over 40 minutes you could catch hypothermia. There's a scene where we're swimming and it looks really hot in the film, but they actually had to pull me out of the water because my lips were going blue, so the medics took my temperature and said I wasn't to go back in."

Thankfully, they had a team of divers – The Frog Squad – on hand to make sure that no one was hurt in the making of the movie.

"Any time we had to do a scene they were swimming around and underneath to keep us safe," adds Nicola. "During one night scene when Jaime and I are trying to escape in the dinghy, one of them popped up suddenly, we thought he was a seal and screamed our heads off!"

If there was a fair bit of screaming both in the film and on the set, there was plenty of time for some laughter, too. Sian – who falls victim to the Donkey Punch of the title – spent quite a lot of time lying on the floor.

"I was wrapped up in a sheet and left in a doorway and kind of forgotten about," says Sian. "And I couldn’t move because I was in this sheet. I was lying there and they decided to do something else, so everyone’s got to step over me and they’re looking down, saying, ‘Hi Sian, are you all right?’ I said, ‘Sort of, it’s a bit weird I’m in this bloody body bag.'"

She adds that having to shoot a scene - still in the sheet - in the freezing water at 4am wrapped up like that was pretty nerve-wracking, but says it was the "incredible" support from the rest of the cast that really helped. "After we cut the scene, everyone just cheered," she says.

Of course, the big question which inevitably comes up, is the donkey punch itself. Olly says that despite the fact it holds a central place in the film – and gives it its title – he actually only found out about it after he and co-writer David Bloom had decided on much of the storyline.

"I was at a very civilized stag do," he reveals. "Everyone felt pressurised to be manly so were telling bawdy stories. Finally one guy says 'Have you ever done a donkey punch?' I'd never even heard of it before. Everyone was laughing but I noticed one guy was listening quite intently - you could tell he was taking it all seriously. As a writer I'm interested in group dynamics, and the idea that this guy was so eager to please the others that he might try it really interested me.

"The other thing feeding into this idea were tabloid stories at the time about footballers accused of gang rape and filming each other having sex. It seemed like there'd been a change in sexual morality and behaviour that I just didn't understand. It seemed like people in their early twenties didn't seem that bothered by the idea of putting themselves online naked or having group sex. I wondered if that was real or just peer pressure."

There has been some criticism levelled at the film as regards its sexual politics. But despite a woman being the first to meet a sticky end, in more ways than one, it's a free for all after that in terms of who goes next.

"They don’t know what’s going to happen when they walk in that room," says Sian, about the scene before the Donkey Punch. "They’re going to have a good time, they’re having a laugh, they’ve been taking drugs, then it just spirals. I think the interesting thing is, especially for Lisa, is she’s completely in control until the very last moment.

"For me I had to step up to what Lisa does. She’s very sexually confident, she’s having a great time and she’s leading the way with these two boys. She’s just young. It’s the idea that when you are young, you live like there’s always going to be a tomorrow. Every day is not your last day and there’s no consequence to anything – just being free as a bird and I think that came across."

Olly adds: "They are young and feeling indestructible. No one is evil, they just make very bad decisions. And no one has super powers, they only have their street smarts. Underneath all the thrills it needs to be credible and intelligent with real decisions, situations where you could be either the victim or the perpetrator."

It is this level of reality that raises Donkey Punch above the average addition to the genre. By keeping the relationships and motivations complex, he and Bloom also keep them believable.

For more information about the film, visit the offiical site

Black Holes: The Edge Of All We Know Dementer The Dissident Eye Of The Storm Iorram Justine Lucky Night Of The Kings Notturno Poly Styrene: I Am A Cliché The Stylist The United States Vs Billie Holiday

Out Of The World Angelou On Burns American Badger Sir Alex Ferguson: Never Give In Vicious Fun The Old Ways There Is No Evil Rosa's Wedding The Woman With Leopard Shoes City Hall Justine Voice Of Silence Wildland The Last Forest I Care A Lot What Do We See When We Look At The Sky? Sweetheart Handsome A River Runs, Turns, Erases, Replaces Bloodsuckers