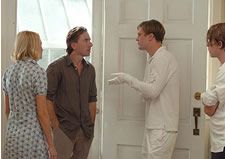 Naomi Watts as Anna, Tim Roth as George, Michael Pitt as Paul and Brady Corbet as Peter in Funny Games

Ten years after directing his hard-hitting Austrian film Funny Games - questioning the cinema audience's role as a voyeur to violence - Michael Haneke has remade the film in America, starring Naomi Watts, Tim Roth, Brady Corbet and Michael Pitt. Eye For Film caught up with its producer Chris Coen to ask him how the project came about and why the Games have begun again.

Tony Sullivan: I caught Funny Games at the Sundance Film Festival, so my first question is, you've ripped off this little Austrian thriller I saw a few years back - how did that come about?

Chris Coen: I saw the film six years ago, my then assistant gave it to me and described it as one of his favourite horror films of all time and he was a huge horror fan/cinefile. I watched it, and watched it again and did some research on Michael and just came to the realisation that maybe there was an opportunity here for its intended audience to see the film and therefore it was a smart idea to approach him to see if he'd be willing to give me an option on the remake rights.

TS: So how did Michael Haneke feel about that?

CC: It took him and his agent a long time to get back to me, so no doubt there was a lot of thought put into it. When he finally did get back he was excited to entertain the idea BUT there were two conditions; One being that he would direct it and two that he would have final cut.

TS: Did he get the urge to change the material?

CC: We met up in Cannes and he asked me what I would change and my reaction was, 'Well it's your film and from my perspective it's a perfect film', so I threw the question back to him and he didn't really answer.

I didn't know he was planning a shot-for-shot remake until much later along in the project and that made perfect sense to me.

TS: For me, as the viewer, I found the experience of watching the new film even more intense because I didn't know where it was going.

CC: Had you heard it was a shot-for-shot?

TS: No, so that made it even more disturbing

CC: I expect a lot of people to be angry, but I'm taking a leaf out of Michael Haneke's book and learning how to handle it.

TS: Michael Pitt and Brady Corbet are just brilliant in it, how did they come on board?

CC: Interesting, Michael was particularly worried about the role of Peter, he was convinced we'd never find an actor who would live up to his image of Peter from the original film. Casting in America is fundamentally different than in Europe and we got to see a lot of actors for the role, a lot of auditions and basically Brady came in and Michael saw him and was overwhelmed – he was cast, the look was there, Michael looked at Mysterious Skin, but Brady was a slam-dunk.

TS: Then you've got Tim Roth playing a thoroughly normal guy and he's played his share of twitchy psychopaths over the years…

CC: Yes, and again I think that's a clever twist on the character on the casting from Michael. There was a big action star we were considering, but Tim was the right fit for us and we were pleased to get him.

TS: You've changed your own career - you were following a directorial path yourself, as assistant director on films including A Kind Of Hush and Hard Men – why the switch to producing?

CC: Actually you know I wasn't… it's a mistake that some people make, that assistant directors would go into directing. I almost think it's the opposite – assistant directing is a very good way to spend time learning every aspect of film production - to be on the set, to be there for pre-production, so I sort of chose that as my route to go into production. I always thought it would be important to understand how a set worked. I never set out to direct, I always wanted to produce.

TS: Funny Games will probably increase gun ownership in the US.

CC: Well I'm investing in security shares that's for sure.

Funny Games is out on general release from April 4. For more information visit the official site, or view the trailer here.

Assimilate Havoc The Inheritance Land Moffie Nomadland The Power The Reckoning Red Rage The Rookies Sequin In A Blue Room Songs My Brothers Taught Me Those That, At A Distance, Resemble Another The Truffle Hunters Valley Of Souls