Eye For Film >> Features >> Plight of the living dead

Plight of the living dead

As Diary Of The Dead is released on DVD read our exclusive interview with George A Romero about zombies, the perils of the internet and a Sound Of Music remake. 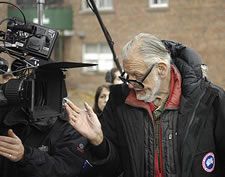 George A Romero on the set of Diary Of The Dead

In a small bar in Park City, Utah, a tall rangy figure ambles over with considerably more zest than his zombie anti-heroes. With George A Romero's latest film Diary Of The Dead having just shown at Toronto and Sundance Film Festivals, he is certainly proving that there's life in those corpses yet.

And his latest outing was certainly a much quicker turn around than the previous sequel - it took 20 years before he followed up Day Of The Dead (1985) with the critically bruised Land Of The Dead in 2005. Romero, says that's just the way things turn out sometimes.

"Yeah, you know it was almost happenstance, I finished Land of the Dead, I liked it, I still like it, but a lot of the fans were somehow disappointed that I was getting too Hollywood," he says. "It was also a very difficult shoot. It was overly ambitious, we weren't rich, it was still guerilla filmmaking, you know and I just wanted to escape and all of these films, all of my zombie films have grown out of what I see happening out in the world".

In the case of Diary, it was the internet that had caught Romero's attention, as his main characters, a bunch of students, shoot camcorder footage of the dead beginning to walk and upload it to the waiting masses straight away. It's clear that Romero sees the advent of 24-hour media on the worldwide web as a mixed blessing at best.

"I had actually started a notebook while we were shooting Land about this emerging new media stuff and I really wanted to do something about that. Then all of a sudden it became really big, everybody is becoming a reporter," he says. "It's not about media; it's about the dangers of making this available to everyone."

Considering the phenomena of round-the-clock news from millions of sources, he looks back at the past with rose-tinted glasses (or maybe that's just a patina of blood splatter…).

"When I was growing up there were three networks in the US, maybe there was some control there, but at least stuff was managed. I find that this absolutely un-tethered information coming from everywhere - means any lunatic could get on there, Hitler could get on there – all of a sudden he's got millions of followers – it might get a bit dangerous, I think we're playing a little bit silly with a powerful thing."

The idea of camcorder filming has definitely become a powerful thing in films this year with several releases tapping in to the phenomenon - from Spanish horror film [Rec] to big-budget creature feature Cloverfield. And, yet, by exploiting the very medium that he is satirising, is Romero getting back to his guerilla filmmaking days?

"I wanted to do something with it right after Land Of The Dead," he says "I wanted to escape the perils, the responsibilities of having suits around, having to deliver. I'd been keeping a notebook for Diary and I quickly finished a new version not for theatrical release. There's a school in Florida called FullSail Film School I wanted to go down there, shoot completely under the radar, forget theatrical, saying, 'Maybe, with my name attached, zombies, maybe it'll go out and get picked up, go to DVD, make some money, I'll split it with you guys, 'literally like that. I almost wanted it to be a vacation.

"But Peter [DoD producer, Grunwald] showed the script to a couple of people and Artfire wanted to give it a little more juice. We were just very careful not to take too much money, we wanted to take just enough to make the movie we wanted to be rough. I can't say it was a vacation, because it never is but it was still an escape back to the old days and I got to do something for the first time since Night Of The Living Dead with a crew of all friends."

Despite having more money than he initially anticiapted, Romero still opted, for the most part, for up and coming rather than established actors. These included Joshua Close - who plays Jason, a student cameraman desperate to capture this fresh apocalypse at the hands of the living dead for posterity - and Michelle Morgan - who plays his long-suffering girlfriend. With a 20-day shooting schedule and no time for the niceties of rehearsal, the cast and crew had to reach that apocalyptic level of intensity from "Zero to 60, zero to 60…".

"We had one read through and talked a lot even during production, you know most of the time is spent hanging around putting up the lights, so everybody knew what we were trying to do. The cast were wonderful, they all had some theatre experience. If I'd asked them to they probably could have done the whole thing in a single shot. We were doing eight page shots and they did it, they pulled it off, we never lost a page with an actor flubbing lines or a camera guy picking up a light – they were great, the whole crew."

Given the tight shooting schedule, I enquire what his take on digital effects is, saying that I miss the work of his frequent collaborator, gore make-up maestro, Tom Savini.

"I do, too, and I like King Kong, the original King Kong even better than Dino's [De Laurentiis] King Kong, forget the new one." he says. "Yes, I would much rather do it almost as an art form, you now, mechanically, but you can't when you're faced with the reality of so many days. You can't run the risk that the cameras are not going to register the flash of the guns, that the squibs are going to work, any time you get blood on the walls, you've got to paint the walls - you can't take those risks.

"There were certain things that had to be digital; the guys head melting; the woman being blown apart – there's no other way to do it. We found that the easiest way to do even the simplest effects, even if it's just a gunshot. You know, the actor points a gun, the zombie falls – the gun flash is digital the blood splatter is digital – you get it in one instead of redo it and redo it and make sure it works OK ."

One wonders if the digital tricks box makes life harder for the actors as the mayhem is not happening in front of them, George reassures me that as his cast didn't have to imagine exploding planets or rampaging dinosaurs. "The actor was able to point the gun – the zombie fell, he even pulled the trigger. There were no situations where they had to imagine too much that they weren't able to hack. It was happening as far as they were concerned. Boom. Blood. "

The assorted radio and TV commentary that plays during the movie is voiced by a celebrity who's who of horror icons, from Shaun Of The Dead's Simon Pegg to horror author Stephen King and director Guillermo del Toro.

George says: "They're just buddies of mine we called them up and said, 'We're doing this little movie, there's a lot of newscaster voices would you like to do it?' – and they all said sure. It was great. It was very gratifying that they said yes, that they were willing to do it. Steve [King] wrote his piece. And the other guys were good friends – people that I've worked with before – I've never worked with Wes [Director, Craven] but we've hung out before. "

Despite his zombie success, the 'dead' movies are not the ones Romero likes best: "Martin and Knightriders are in my heart, the ones I love the most," he says. "The zombie stuff is a wonderful way for me to make movies about something real, to, say, comment or at least take a snapshot of what seems to be happening in the World. "

One wonders what sort of films he would have liked to have made if he was not typed as a horror director.

"Since I was a kid I wanted to do a Tarzan movie," Or, he says, twinkling: "A remake of The Sound Of Music, I like that idea, I'll make a lot more out of the Nazis," adding, "It might get a bit heavy at the end."

I thank George and leave with the image of a twirling Julie Andrews being pursued by flesh-craving Nazi hordes embedded in my brain… The hills are quite dead with the sound of...