Eye For Film >> Features >> A view of Petropolis

A view of Petropolis

Producer Spencer Tripp talks about his remarkable new film and the importance of the Alberta tar sands. 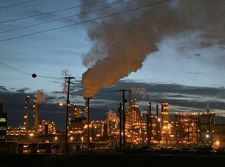 "The tar sands in northern Alberta, in Canada, cover an area about the size of England," Spencer Tripp explains. "There are large amounts of crude oil, called bitumen, buried beneath the surface. It took several years after this was discovered to figure out a process to extract the oil. That as in the late Sixties, but the process only started in earnest after the price of oil shot up at the start of the last decade. It's a highly energy intensive, water intensive process, incredibly polluting, and it involves a huge amount of clear cutting. It's deforesting a huge region which is not only important to wildlife but is also a major carbon sink."

He's talking about the subject of Petropolis (subtitled Aerial Perspectives On The Alberta Tar Sands), of which he is executive producer. As head of communications at Greenpeace Canada he's new to the filmmaking business but this seems like a natural step, and the exploitation of the tar sands is clearly something that concerns him on a personal as well as a political level.

"It takes three barrels of water to produce one barrel of oil," he tells me, "so the local watershed is literally being drained by the tar sands. And after oil production, the waste water is so toxic that it has got to be contained in toxic lakes that are so large they can actually be seen from space. The process also causes an incredible amount of acid rain, with sulphur dioxide damaging the trees. It's the fastest growing source of greenhouse gas emissions in Canada and it's interfering with the country's wider environmental policy. The government can't do anything serious about emissions without addressing the problem in Alberta, so although they signed and ratified the Kyoto protocol they're not really dealing with the issue and they've been blocking climate legislation elsewhere."

Given that Spencer has so much to say, you might expect an angry, fact-filled documentary, but Petropolis is something quite different. In fact, most of it has no narration at all - instead, we observe the area from the air, seeing for ourselves the devastation that oil extraction has caused. I ask how he came to address the issue this way.

"Right from when we launched our campaign in 2007, I recognised that it was a story that needed strong visual images," he says. "I went looking for the best way to capture these in stills and videos. I'd done some similar work when I was with the International Fund for Animal Welfare and I helped to document seal hunting. In this case I was keen to produce something highly cinematic, so I used a gyro-stabilised camera mounted on a helicopter.

"I planned to use the footage in a more traditional documentary and I was collecting interviews to go with it, but then we engaged Peter Mettler. We were hoping that with his sense of visual acuity he could make the aerial footage more cinematic, so he came on board as director of photography on the understanding that we'd share that footage and he could use it for his own film projects. Then he became so engrossed in the production that he decided to become the director. What I had originally envisaged changed under his complete directive control. In a way it's a counterintuitive piece because Greenpeace have a reputation for being very direct - for punching people right between the eyes with ideas - but Peter preferred something more visceral. He wanted viewers to come to the story themselves when they saw what's happening."

I note that I have heard a rumour that there's another reason the film was shot from the air - because security staff working for the oil extraction companies made shooting on the ground very difficult.

Spencer concurs. "The first two projects to be developed on the tar sands were bisected by a highway, but later ones are completely out of the way on company-controlled private roads. They're completely inaccessible - we simply couldn't get near them. When we did try to film on the ground, the security people were on us within a matter of minutes and they forcibly removed us and our camera equipment. But in a way that was a bit of a boon for us because I think the aerial approach turned out better. From the ground there's no way to get any perspective on the scale of the thing. From the air, as far as the eye can see there's nothing but polluted water, and you can see the curvature of the Earth at the horizon."

I've heard that the resulting film has attracted so much attention that companies including Syncrude and Shell have launched a counter-campaign, but Spencer says he is unfamiliar with this. However, "we've been incredibly active and vocal about this and it didn't take long for the provincial government of Alberta to announce special public relations funding to combat the image of dirty oil."

That image comes across starkly in the film, but Peter Mettler has said that the one thing that's missing is the smell. I ask Spencer what audiences would be in for if they could experience that too.

He hesitates. "It's very pungent," he says, with an air of dramatic understatement. "At once point we had a photographer with us and he and Peter started to suffer from headaches because they were yet to get used to the smell. It's overwhelming. There are also air cannon firing off everywhere to deter wildlife from approaching the mines and the ponds, and there are flames that come shooting up out of massive stacks, and it's very otherworldly. It doesn't feel like something that should be on this planet."

One sense audiences can access directly is sound. Petropolis has a remarkable soundtrack, non-intrusive yet highly effective. How did that come about?

"That was a bit of luck," Spencer admits. "The composers [Vincent Hänni and Gabriel Scotti] are from Switzerland. Gabriel was a fan of Peter's and contacted him shortly before he began work in earnest to put the film together post-production. He basically sent him a disc of their work and Peter really liked it and said 'Let's work together.' When he got the soundtrack he recognised that there was something industrial about it that matched the film's themes very well, and in the end he also added a lot of sounds of his own - everything from coffee grinders to trucks backing up. It was a very interactive collaboration and I think it's been great for the film."

So finally, what would Spencer suggest that people who are moved by the film should do to help the situation?

"In the UK I think people should question British Petroleum's involvement with the tar sands," he says. "They're a very big investor there. In recent years they've attempted to rebrand themselves as a cleaner, greener company, but their actions don't match their words. If people can find the opportunity to protest against what they're doing, I would encourage that."

Petropolis is out in cinemas across the UK from this week.