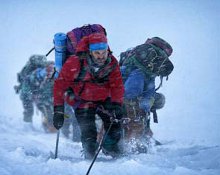 Celebrating its 72nd edition in 2015, Venice Film Festival ran from September 2 to 12, it opened with Baltasar Kormakur's Everest and closed with Mr Six, directed by Hu Guan. The Official Competition films vie for the Golden Lion.

Seven films also competed in the Film Critics' Week section, which this year marks its 30th year. To celebrate, Peter Mullan was guest of honour and received the Saturnia Prize – SIC 30 Special Award – after his film Orphans (which also screened) was voted the best debut to ever be screened at the event.

Behemoth
Everyday life in a Mongolian community turns into a Dantesque journey. Documentary.

Kill Me Please
After an encounter with death a teenager will do anything to make sure she's alive.

MA
In this modern-day vision of Mother Mary’s pilgrimage, a woman crosses the American Southwest, deconstructing the world around her.

Equals
A futuristic love story set in a world where emotions have been eradicated but where a genetic glitch means some people can still fall in love.

The Childhood Of A Leader
Fable about the rise of fascism set in post-First World War Europe.

The Wait
A mother unexpectedly meets her son's fiancée at a villa in Sicily and gets to know her as she waits for her son to arrive.

Neon Bull
Story of a bull handler who dreams of a career in the world of fashion.

Remember
Zev has a mission: to avenge family, murdered 70 years ago by a Nazi guard who lives under an assumed identity in America.

A Bigger Splash
A rock star's holiday is interrupted by the arrival of her old flame and his daughter.
A-Z of Venice Film Festival 2015 reviews >>>

Ears for comedy
Alessandro Aronadio in conversation about his absurdist drama.
A duck to water
Paul Schneider on types of actor, Ibsen, and The Daughter.
An American story
Discovering MA with Celia Rowlson-Hall, Ian Bloom and Iva Radivojevic.
Lost and profound
Verena Kuri and Sofia Brockenshire talk about their feature debut One Sister.
Faith in the family
Shubhashish Bhutiani on his feature debut Hotel Salvation and Venice's Biennale College.
Childhood ambition
Brady Corbet on making audiences think, Robert Pattinson and the culture of celebrity.
Sound and fury signifying everything
Brady Corbet on history repeating itself and the look and score of The Childhood Of A Leader.
Noting the difference
Composers Danny Bensi and Saunder Jurriaans talk about Christine, Frank & Lola and The Fits.
A light in dark places
Josh Singer talks religion, journalism, Boston and the making of Spotlight.
Beefing up reality
Gabriel Mascaro on the mixture of the surreal and the actual in Neon Bull.
Faithful representation
Jake Mahaffy on religion, authenticity and empathy in Free In Deed.
Testing the limits
Yorgos Zois on imagination and reality in Interruption.
In between worlds
Hadar Morag on shifting perspectives and the collapse of language in Why Hast Thou Forsaken Me?
Venice 2015: Emotional highs
A Bigger Splash, Heaven Can Wait and Anomalisa
Child's play
Kohki Hasei on Blanka, Manila's slums and kids' positivity.
Portrait of alienation
Pema Tseden talks about Tharlo.
The challenges of Tharlo
Yangshik Tso on identity, greed and working with Shide Nyima.
Venice 2015: The state of independents
Looking For Grace, The Daughter, Equals, The Childhood Of A Leader
Venice 2015: Peak viewing
Reports on Everest, Black Mass, Spotlight and The Danish Girl.
Moving on up
Anna Rose Holmer on adolescence, gender identity and self-determination in The Fits.
Scaling the heights with Everest
Deauville opening night premiere
Growing pains
Kuba Czekaj talks about exploring adolescent fears in Baby Bump.