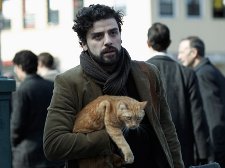 The 2013 edition of the London Film Festival will run from October 9 to 20. The festival will open with Captain Phillips and close with Saving Mr. Banks.

Other hotly anticipated titles include 12 Years A Slave, Inside Llewellyn Davis and Blue Is The Warmest Colour. The Surpise Movie was The Grandmaster.

Closed Curtain
A writer and his dog retreat to a coastal villa only to have their peace disturbed by two siblings fleeing the police.

Eastern Boys
Story about a solitary Parisian and a young Ukrainian migrant.

All Cheerleaders Die
A gang of cheerleaders embark on a supernatural path of vengeance.

Ida
A novice nun comes face-to-face with her family’s past in 1960s Poland.

Tracks
Based on the true story of Robyn Davidson who in 1977 undertook an extraordinary solo trek across the harsh Australian outback.

Tom At The Farm
A young man finds himself embroiled in a dangerous game of deception.

Inside Llewyn Davis
One week in the life of a talented, failed singer/songwriter in Greenwich Village, New York, in the Sixties
A-Z of London Film Festival 2013 reviews >>>

Making Tracks
John Curran on working with Mia Wasikowska, dogs and camels in Tracks.
Architecture of love
Joanna Hogg talks about making her third film Exhibition.
Life and movement
Jasmine Trinca on the physicality of her role in Honey and roles for women in Italian cinema.
Fusion cinema
Rebecca Zlotowski on music, love and going nuclear in Grand Central.
A taste of Honey
Valeria Golino on her award-winning film, breaking boundaries, the meaning of rabbits and more.
Danger man
Denis Côté on ambiguity, surprise and risk-taking in Vic + Flo Saw A Bear.
Teenage kicks
Matt Wolf and Jon Savage talk about their documentary on the emergence of youth culture.
Tracing roots and routes
From Django Unchained and Lee Daniels' The Butler, to 12 Years A Slave and The African Americans: Many Rivers To Cross
All about Gloria
Sebastián Lelio and Paulina García on their new film.
New York Film Festival - diary four
From the Applied Science of Tim's Vermeer to the Cloud Chamber Mystery, It's The Cat and a restoration of The Chase.
New York Film Festival - diary three
The Immigrant, Gloria and Jimmy P: Psychotherapy Of A Plains Indian
New York Film Festival - diary two
Stars talk All Is Lost, The Last Of The Unjust and Nebraska.
New York Film Festival - diary one
From NYC to London: Captain Phillips, The Invisible Woman and Only Lovers Left Alive
Brilliance of Breillat
Isabelle Huppert in conversation about character, style and the director of Abuse Of Weakness.
Strengths in Weakness
Catherine Breillat on casting, colours and learning how to laugh in her latest film.
In the family
Hirokazu Kore-eda on Like Father, Like Son
The precision of a master
Wong Kar Wai on making The Grandmaster
The real deal
Paulina García on playing Gloria
Vidal statistics
Director Nicholas Wrathall on his Gore documentary.
An audience with Stritch
Broadway legend Elaine talks about her life
Tribeca Film Festival Diary - Passionate Portraits
Documentaries on Gore Vidal, Elaine Stritch and teen origins.
Life Aquatic
Captain Øyvin Lauten talks about building and travelling on the Kon-Tiki, used in the film of the same name.