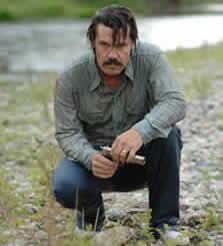 No Country For Old Men was among the films receiving their premiere.

The New York Film Festival was created in 1963 to bring to New York the best films from abroad and to highlight American films "that might have otherwise passed unnoticed," wrote Richard Roud, who, along with Amos Vogel, co-founded the festival. Now in its 45th year, it aims to showcase the cream of the crop from around the world.

Although not as large as leviathans such as Sundance and Toronto, it aims to provide a smaller showcase, with the emphasis firmly on quality. This means many of the films on show have already won awards - 4 Months, 3 Weeks & 2 Days (Golden Palm), The Diving Bell And The Butterfly (Best Director At Cannes), Redacted (Silver Lion in Venice) - while others, such as Sidney Lumet's Before The Devil Knows You're Dead and the Coen Brothers' No Country For Old Men were hotly (and rightly) tipped to be audience hits. This year's festival featured 28 films.

The Flight Of The Red Balloon
A busy mother’s young boy attracts the attention of a large balloon.

The Man From London
After witnessing a murder, a railway switchman makes a discovery which will change his life forever.

In The City Of Sylvia
A boy dreams of finding a lost love.

Married Life
How do you avoid humiliating you wife with a divorce? Kill her.

Redacted
Controversial story, asking where, in the censored war in Iraq, do we find the truth? Plus read what Brian De Palma said about the film - and the redaction of it, here.

Margot At The Wedding
A neurotic woman undermines her whole family and her sister's impending marriage.

The Diving Bell And The Butterfly
The memoirs of a man who awoke from a coma to discover he was completely paralysed apart from his left eye.

Persepolis
A girl's eye view of the Islamic Revolution in Iran.

No Country For Old Men
A man goes on the run from a psychopath in Texas after coming across a briefcase of stolen cash.

Sachs of talent
The director of Married Life talks about his latest film and his inspirations in our exclusive interview.
Truth a casulty of war?
Brian De Palma questions the reporting of the Iraq conflict and talks about the inspiration to make Redacted.
Fresh cut of the blade
How Ridley Scott's sci-fi classic came to be sliced so many different ways.
Secrets behind the Sunshine
Director Lee Chang-dong talks about his latest film.
Passage to India
Director and cast talk about The Darjeeling Limited.