The director of Married Life talks about his latest film and his inspirations in our exclusive interview. 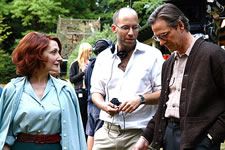 When it comes to triangles, Ira Sachs reigns supreme. Even the title of his first film, Delta, suggests the Greek letter of the same name, and it is threesomes that form the crux of his films – from the straight/gay triumvirate in his debut feature, through the love triangles in his Sundance Award-winning 40 Shades Of Blue. In his latest film Married Life, although there are four main characters, it is the two triangles they create between them which beat at the heart of the drama

Set in 1949, the film is a rich period piece and, as Harry decides killing Pat may be kinder than a humiliating divorce, it slips gently into film noir mode, but Sachs shifts the tone to something a lot more melodramatic through the course of the film. He says this is an “organic” way of working.

“It has to do with the fact that I don’t differentiate all that much between all those genres in my head as a filmgoer,” he says “They all seem part of my imagination, if that makes sense.

“I set out to find a kind of domestic mystery. I find married life, which I use very loosely to mean any long-term relationship in which you’re intimate with another human being – and I say that as a gay man – it could be a gay relationship or a straight relationship, whatever it might be, but that to me is a genre in itself, which involves, comedy, tragedy, suspense. I think all those different genres are part of married life as an experience – and I hope they’re part of the film.”

It is the complexity of the relationships which really draws the viewer into the film. The screen time is shared evenly among the central characters and all have flaws, both obvious and more hidden. The Memphis-born director says he was curious to see how viewers took to the characters.

“I’m inspired by directors like Robert Altman, John Cassavetes and Ken Loach, particularly in terms of democracy. Robert Altman is the great democratic director – everyone has character, everyone has their own story in his movies and I really love that.

“I think drama is made out of questions of who is right and wrong. If all the characters were behaving exactly as they should – and tell me who behaves exactly as they think they should, including yourself? – would you be interested?”

But it was important for Levin – who adapted the film from British novel Five Roundabouts To Heaven, By John Bingham – for the audience to be able to retain sympathy for Harry, despite his poisoning plot.

“What’s nice about this film is that there are four central characters, each of whom is driven by a great passion to change their life at the moment at which we meet them in the film, and I think that’s actually why the story is so combustible,” he says. “Because you have four people trying to change their lives at the same time and that’s very difficult, when you’re four people so intimately connected.

“I cast Chris Cooper first. I built the film around him. I thought there was a way in which he as an actor could make a character who does some very bad things still seem sympathetic to the audience.”

Oddly it is eternal good guy Brosnan’s character, Richard, who comes across as the most nefarious through the course of the film – the perfect scenario for Sachs.

“Often in the development of the script, there were times that people said I’m worried that people are going to lose sympathy for Pierce’s character and my co-writer Oren Moverman and I said, ‘I guess we’ve done a pretty good job because the guy who wants to kill his wife? No one’s worried about whether they’re going to like him. The guy who cheats on his best friend? That’s really bad.’

“I think there’s a lot of relativity to the question of good and bad in the film. I think for some people, that’s the way it defies genre the most is the sense particularly in movies today – more so than in noir, for example – there is an idea that who is good and who is bad needs to be decided from the outset and these characters do not let you decide who to root for and there’s a democracy on some level.”

Its fair to say that none of Sachs’ cast will ever see 25 again, which some may say is a brave decision for a director in a movie marketplace that is constantly chasing the teen demographic. Sachs is clearly a fan of 40s films – particularly those of Joan Crawford – so it seems natural that he opted for an older demographic.

“When I was casting Rachel there were questions of whether her age would work with Chris Cooper and I ended up looking back. When Kim Novak made Vertigo, she was 25. When Grace Kelly made Rear Window, she was 25. I think the nature of a woman in the late 40s and early 50s was such that people grew up faster – there wasn’t this delayed adolescence like we have now. So, I think they are all people who have lived, people who are more interesting to me generally in movies. People who have actually gone through things is something that you feel in a performance.”

And Sachs argues there are plenty of people who want to see this sort of film.

“There is still an audience for it if you tap it properly. There is an audience hungry to see those stories. You’re always challenged if you want to make things that are slightly different from what is being made every day.

“I’m very inspired by Altman, in general, and his career. He’s the guy that made Nashville, MASH and McCabe And Mrs Miller and then couldn’t make a film. Can you imagine if you happened to be the person who had made those movies?

Or Scorsese, in the same way. Scorsese to me was at his high point at Bringing Out The Dead and Kundun and no one went, so he makes different films at this point, which to me are less interesting. Every director who is trying to tell unique stories is challenged.”

On the question of challenges, Sachs doesn’t seem to shy away from them, particularly when it comes to period-set drama – his next film, The Goodbye People – “about sex and love and intimacy and cults and drugs” - is set at the end of the 1960s in Los Angeles. So does he like the challenge of different time settings?

“No I don’t,” he says, laughing. “I wish it was present day. I don’t like the challenge and yet I find that the film is calling me in a very deep way. I don’t really look at it as being in the past. It’s set in the 60s but in every film you need to build a world and this one will have good costumes and sets and the actors and I won’t be living in that world. I hope to begin shooting at the beginning of next year.”

Married Life is in UK cinemas from August 1.

We're currently bring you coverage of the Glasgow Film Festival.