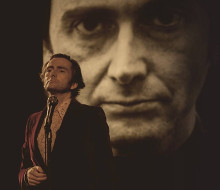 David Tennant in Mad To Be Normal

The Glasgow Film Festival returns for its 13th edition in 2017. The festival opened with Handsome Devil on February 15 and closed with the world premiere of Mad To Be Normal on February 26. You can read details of Glasgow Short Film Festival here.

This year's Audience Award went to Lipstick Under My Burkha.

Abulele
A boy whose family is in crisis after his brother's death begins to put his life back together after meeting a friendly monster - but the monster may need his help.

The Warrior's Gate
A US teenager is magically transported to ancient China and learns to convert his video game skills into those of a Kung Fu warrior.

Happy Hunting
An alcoholic drifter must battle withdrawal and psychotic rednecks after he becomes the target of a deranged sporting event.

In Between
Three Palestinian women share a flat in Tel Aviv.

Shin Godzilla
Japan is plunged into chaos upon the appearance of a giant monster.

A Dark Song
A grieving mother sets out to contact her dead chiild.

Fashionista
A woman who uses clothes as an emotional crutch discovers her life isn't as ideal as she thought.

The Night Of The Virgin
One New Year's Eve party, Nico, a naive 20-year-old, sets out ready to lose his virginity at all costs. In the middle of the party, his gaze crosses Medea, a cunning and attractive mature woman.

Dawn Of The Deaf
When a sonic pulse turns the hearing population into zombies, what effect will it have on the lives of the deaf people who survive?
A-Z of Glasgow Film Festival 2017 reviews >>>

The treasure hunters
Tomas Leach on The Lure and the importance of mystery and adventure
Looking for trouble
Oliver Laxe on making life difficult for himself when filming Mimosas.
Feeling as others do, part 3
Terence Davies on A Quiet Passion and what he's working on now.
Untold stories
Jon Nguyen on the art of filming David Lynch.
A winning recipe with Courgette
Claude Barras on Aardman, Oscar nod, and an enduring passion for animation.
Portrait of a Lady
William Oldroyd on austerity and colour-blind casting in his debut Lady Macbeth.
Heart of the matter
Katell Quillévéré on Heal The Living, organ donation and E.T.
Mad for it
GFF Diary days 11&12: David Tennant, Frightfest and The Princess Bride.
The shivers
GFF Diary days 9&10: The Thing in the snow, Frightfest, Terence Davies, Quinton Aaron and more.
Gentleman of letters
Gay Talese on the importance of James Baldwin and films in I Am Not Your Negro.
Screenings with style
GFF Diary days 5&6: power dressing, pipers, Persian food, David Lynch’s photographs and the Margaret Tait Award.
Huppert - the actress who knows no fear
Elle star on working with Verhoeven, awards and the gift of confidence
Stranger days
GFF Diary days 3&4: dinner, dancing, alien hunters and all the fun of the fair.
Looking good in Glasgow
GFF Diary days 1&2: Handsome Devil, femmes fatales and how to have the time of your life.
Recollections of James Baldwin
Gay Talese on the man behind the legend and I Am Not Your Negro.
Why Ozon revels in secrets and lies
The director of Frantz on his fascination for Germany, shooting in monochrome and falling in love on set.
Glasgow Film Festival early bird highlights
Graduation, I Am Not Your Negro, Aquarius and A Quiet Passion.
The view from the mountain
Cristian Mungiu talks about honesty, guilt and Graduation.
Finding treasure
Sônia Braga on Aquarius and working with Kleber Mendonça Filho.
Feeling as others do, part 2
Terence Davies talks about Emily Dickinson, death, costumes and A Quiet Passion.
Diving into the life of Jacques Cousteau
The Odyssey director Jerôme Salle on an underwater legend.
An extraordinary individual
Colin MacCabe remembers John Berger.
Making a splash
Lara Stolman on Swim Team and getting to know the Jersey Hammerheads.
All the colours of Aquarius
Kleber Mendonça Filho on madeleines and memories.
Learning to say no
Sônia Braga on Aquarius and surviving the red carpet.
Feeling as others do, part 1
Terence Davies on innocence, sin, half smiles and A Quiet Passion.
Inside and out
Kleber Mendonça Filho on Aquarius and a changing world.
The storyteller's tale
Colin MacCabe on The Seasons In Quincy: Four Portraits Of John Berger.
Kristen - spirited away by Assayas
Twilight star on ghosts, communication and energies.
Faithful representation
Jake Mahaffy on religion, authenticity and empathy in Free In Deed.
Romero - master of the macabre
Veteran director on zombies, religion and genocide.
Divine grace
Mink Stole remembers cinema's biggest star.
Surviving on star quality
Faye Dunaway on ageist attitudes, inequality and stage roots.
Master Carpenter
As a new box set of John Carpenter's work is released on DVD, we take a midnight stroll through his back catalogue.
Plight of the living dead
As Diary Of The Dead is released on DVD read our exclusive interview with George A Romero about zombies, the perils of the internet and a Sound Of Music remake.