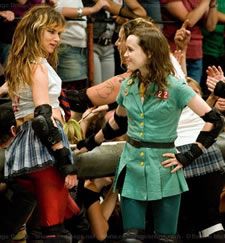 Drew Barrymore's debut Whip It is among the gala screenings

The sixth Glasgow Film Festival is bigger and better than ever, with lots of exciting things going on. Opening with the premiere of Jean-Pierre Jeunet's Micmacs, it features new work from the likes of Hayao Miyazaki, Todd Solondz, Drew Barrymore and Werner Herzog.

Frightfest is back for a spine-chilling weekend, the youth festival will provide entertainment for everyone from tots to teens, there's a retrospective focusing on the suave Cary Grant, a special look at the best of new Japanese cinema, and a personal appearance by the voice of Darth Vader himself, James Earl Jones - one of several stars who will be walking along the red carpet at the GFT.

The likes of Zombie Zombie and Pere Ubu will be performing special film-based concerts and there will be glittering parties to look forward to. We'll be bringing you all the news right here, along with exclusive features on the people and the films it's all about.

The Bedfords
A new look at the Scottish highlands as imagined by the Victorian aristocracy.

Ran
A warlord splits his kingdom between his sons only to see the older two cause chaos as they battle for supremacy in this vivid Japanese reworking of King Lear.

Only Angels Have Wings
An Andean adventure sees a bold young woman trying to cut it as a freight pilot and falling for her boss.

To Catch A Thief
A retired jewel thief is disturbed by the fact that a new criminal appears to be copying his style.

Gregory's Girl
A gangly schoolboy develops a crush on a girl who plays some of the best football he's ever seen - but dealing with girls is even more complicated than it first appears.

All Around Us
Witty drama about eight years in a marriage.

American: The Bill Hicks Story
Documentary examining the life and legacy of the controversial comic.

Farewell
A spy finds himself in danger when he decides to leak documents that could lead to the downfall of the Soviet Union.

The French Kissers
A geeky underachiever finds his life turning around when the prettiest girl in his class declares an interest in him - but both are nervous, and they soon discover that relationships are fragile things.

Stolen
Saharawi refugees in the Algerian desert speak out about slavery, and two filmmakers find themselves in unexpected danger.
A-Z of Glasgow Film Festival 2010 reviews >>>