As a new box set of John Carpenter's work is released on DVD, we take a midnight stroll through his back catalogue. 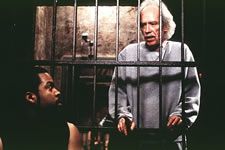 John Carpenter on the set of Ghosts Of Mars

During the late Sixties and early Seventies, the Hollywood that was disintegrated, the studio system broke down and out of the chaos emerged an American New Wave, similar to what was going on in Europe in some ways, stylistically different and aimed at a younger generation of folk whose outlook was very different from their parents. Generalising here, the essential difference between these two film cultures was that the Europeans wanted to break all the rules and create art, while these young American revered the product of the past and sought to stamp their own mindset upon it and produce entertainment.

John Carpenter grew up on movies, aged five, he cites It Came From Outer Space as making an indelible impression on him with its 3-D meteor crash – he was sold on fantastic films. Aged eight, he was shooting his own 8mm films and by age 16 was producing a fanzine, Fantastic Films Illustrated.

Carpenter enrolled in The University of Southern California Film School which put him on the map first as editor and composer on The Resurrection Of Broncho Billy, which nabbed the Oscar for Live Action Best Short Subject in 1971. From July 1970 and for the next four years, Carpenter and fellow student Dan O'Bannon laboured over a Science Fiction opus entitled Dark Star. The finished product looks remarkably polished considering the turmoil of its creation which would start and stop as more money was scrounged. It is unfortunate that at the end of the day, the USC film school, Carpenter and O'Bannon all at loggerheads with each other. The film itself is a low-budget comedy delight and we owe it a nod of thanks because O'Bannon reworked the script into Alien, and for its influence on Red Dwarf.

In 1975, Carpenter made his own homage to the westerns of John Wayne and Howard Hawks. Carpenter's original script entitled The Anderson Alamo became, courtesy of the distributor, Assault On Precinct 13, which is inaccurate as the action takes place in Precinct 9. Dripping with atmosphere, the film set up the scenario that has become Carpenter's stock in trade – a small group of individuals beleaguered by incomprehensible forces. Assault became much touted at the 1977 London Film Festival and Michael Myer's (note the name) company, Miracle Pictures picked up the film for distribution. The director came into vogue on the BBC as it aired Dark Star and a TV special concerning the making of Carpenter's next opus… the film for which he is most famous and whose imitators plague us to this day – Halloween.

I'll not dwell on Halloween other than to note that the film scared the bejesus out of us back in 1979. As with Dark Star and Assault On Precinct 13, Carpenter fills multiple roles as writer and/or editor and generally as music composer.

Carpenter went on to the TV movie biopic of Elvis still unreleased on DVD courtesy of music rights complications. It's a pity, since it is rather good and if it were better remembered, Carpenter might have had more varied movie assignments over the years.

Next up, Carpenter set out to make a moody ghost story in the Val Lewton mold only to find that more visceral shocks were needed requiring some reshoots. The Fog concerns an assortment of rotting seafaring folk determined to avenge themselves on a town that thinks itself innocent. The film is riddled with in jokes and name dropping of Carpenter's associates over the years, including a cameo by Carpenter himself. Perhaps unfairly derided for not being Halloween, critical response for The Fog began to set a trend for Carpenter projects to be somewhat dismissed. There are still so few good ghost stories that The Fog still ranks as one of the very best, its tone admirably set as a grizzled John Houseman spins a chilling yarn to school kids round a camp fire.

A splendid reteaming of Carpenter and his Elvis impersonator, Kurt Russell, resulted in one of the most hip and influential of all early 80s films, Escape From New York. By turns goofy and exciting, Carpenter's cynical anti-hero, Snake Plissken, has to infiltrate Manhattan Island which has been turned into a vast open prison, to rescue Donald Pleasence' President who has become a hostage there. With varying degrees of help from a motley crew of inmates, Snake manages to save the day…sort of.

The curious rise of a group of special-effects artisans, many students of respected make-up artist, Dick Smith, provided a unique opportunity for horror filmmakers in the early Eighties. Rick Baker came to the fore with An American Werewolf In London, Rob Bottin proved himself on The Howling. The latter was hired by Carpenter and Universal Studios to provide the make-up illusions for a big budget remake of The Thing, a favourite of Carpenter's.

A small Antarctic scientific unit finds itself host to an alien life form which doesn't have their best interests at heart. The result stands as the pinnacle of practical special effects, a tour-de-force by Rob Bottin and his team which is admirably showcased within Carpenter's film. The razzle-dazzle climax really occurs midway through the picture during an already tense scene when Kurt Russell, suspected of being infected, holds the rest of the group at bay when Charles Hallahan's character succumbs to a heart attack.

Greeted with critical scorn, possibly because 1982 was the year of endearing E.T.s courtesy of Mr. Steven Spielberg, the film didn't do as well as expected, but later did a raging business on home video.

"I've written a couple of real westerns… but you have to pick up all that horseshit after each shot." ~ John Carpenter

I suspect the next few years were frustrating for Carpenter, a couple of projects fell through: a Dan Aykroyd comedy, an adaptation of Stephen King's Firestarter went elsewhere, sadly. The consolation prize was a lesser King story about a possessed Plymouth Fury, Christine. Carpenter did well, aided by a cracking score of oldies mixed in with own trademark sound.

Starman was something of a change of pace, the sci-fi romance with a perfect pairing of the delectable Karen Allen and Jeff Bridges in his prime, ably supported by Charles Martin Smith as a benign scientist. I defy you not to get all teary-eyed at some point.

Big Trouble In Little China tapped martial arts, comedy and horror all slightly numbing in effect and definitely before its time. Perceived failure at the box office plus one suspects Carpenter's disillusion with the major studios drove him back to lower budget efforts with more control.

The first of these was the underrated Prince Of Darkness, a comic horror paying tribute to Brit sci-fi scribe, Nigel Kneale, that takes a couple of swipes at organised religion along the way.

"They Live was made as response to the horror of the Reagan years." ~John Carpenter

They Live concerns aliens that have already successfully infiltrated society. The populace made pliable through vacuous television and advertisements hiding subliminal messages to "obey" and "consume". Fear not, along comes Roddy Piper's drifter to "chew bubblegum and kick ass". As sci-fi and horror the film somewhat misses the mark, but as satire it is possibly even more relevant for the George W. era than the Reagan one.

As 1992 rolled in Carpenter got his chance to make an out-and-out comedy, teaming with Chevy Chase for Memoirs Of An Invisible Man, but despite a William "Princess Bride" Goldman script and state-of-the-art special effects from Industrial Light and Magic the film refuses to work on any level. Again one suspects the experience wasn't a happy one although Carpenter seems to have established a good rapport with actor Sam Neill that would pay off in his next film.

Back to low budget happiness with In The Mouth Of Madness, a delirious nightmare concerning the disappearance of a Stephen King-like author whose works are busy coming to life and a hapless insurance investigator, the wonderful Sam Neill, who gets sent to find the fellow.

A remake of Village Of The Damned failed to assail the perfection of the original despite good work from Christopher Reeve, while Escape From LA brought Snake Plissken back the screen in an altogether too jokey sequel that only gels towards the end.

Vampires contains the first half of John Steakley's novel of modern day bloodsuckers and the Vatican sponsored hit squad seeking them out. Problems occur when the team encounters a particularly ferocious vampire. Slightly overwhelmed by James Woods' exuberant performance as ace vampire hunter, Jack Crow, and hurt by an awkward misogyny towards its leading lady, the film still manages some memorable set pieces. Pity the plot didn't follow the novel's most interesting twist though. Carpenter seems to have had a blast recording the score with a band entitled The Texas Toad Lickers comprising Booker T's Steve Cropper and Donald Dunn and Steely Dan's Jeffrey Baxter among others.

A certain apathy hangs over Ghosts Of Mars which languished in distribution hell for a while, Carpenter's last big screen effort again courted critical and popular disdain, possibly because it lacked the punchy in-your-face editing that is required for action movies in the digital age. The feature has certain parallels with Assault on Precinct 13 which gave his career a certain closure or so I thought at the time.

Scoring pride-of-place on the TV series for out-of-vogue horror film directors, Masters of Horror, JC provided a couple interesting efforts but I would argue that even second string Carpenter outshines the competition.

Brand name recognition plus the desire to emulate Carpenter by a new generation of writers and directors has caused a plethora of remakes and homage, from Wes Craven's splendid Scream to the dreadful, the remake of The Fog which fails to capture anything of the atmosphere of the original. In between lurks a passable remake of Assault and we're promised a new version of Escape From New York that may have been rendered obsolete by Neil Marshall's Doomsday.

When asked: "Do you feel like you've influenced so many modern film makers like Guy Ritchie or Quentin Tarantino?" Carpenter's simple reply was: "No." But if you listen to the commentary tracks on the likes of Robert Rodriguez' Planet Terror though, you'll hear a different story.

At time of writing he has a couple of projects in the works, I still hold out the hope that the stars will align for him again to produce more memorable movie magic.

A box set of John Carpenter films featuring The Thing, Prince Of Darkness, Halloween, Escape From New York, They Live, The Fog and Assault On Precinct 13 - The John Carpenter Collection - is out to own on DVD from October 6 from Optimum Releasing, priced £39.98 on Amazon. To buy it, click here.
Share this with others on...