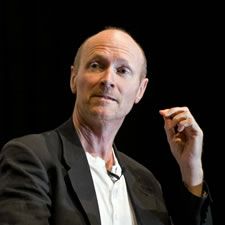 A world famous footballer. Rock n' roll. Romance. Gun crime. And a depressed postman. Not ingredients you might expect to find in the same film, but with Looking For Eric, screenwriter Paul Laverty has created a real comic gem. Addressing a select audience at the GFT, he explained how the film developed and how legendary Manchester United centre forward Eric Cantona came to be involved.

"Eric came to us in London at the end of August to see Ken Loach, the director. For many years Eric had loved Ken's films. They're actually mainstream in France. Now, our producer, Rebecca O'Brien, we've worked with for a long time, and she created a brilliant space in which we could work, so we had the whole team there. Eric had an idea, based on the story of a fan who had followed him from Leeds. Eric's a brilliant footballer and he's also a very strong and forceful personality off the pitch. Ken had already decided that he wanted his next film to have an element of mischief in it. I'd always wanted to write a love story between grandparents, but of course if you say that to financers they don't get too excited. I think it's interesting because as you get older a lot of things change and you're ambushed by life. Most people by that age will have faced some kind of crisis in their lives. I like the idea that the influence of the past still has a powerful effect in the present. So it was about bringing these elements together."

Paul stresses that he wanted to make his story do something different from what he's used to seeing in Hollywood films. When it comes to characters, he's interested in their weaknesses and flaws.

"I think Eric Bishop [the hero of the film] is very flawed and quite fragile," he says, "and I think it's interesting how something that happened to him 30 years ago can still seem fresh to him today. He's suffered a lot, but the difficulty I faced was in getting that balance right with that so that it didn't spoil the comedy, because if you're really depressed you can't get out of bed. Eric actually has a lot of good friends but he doesn't realise it and the only person he can talk to - through his poster - is Eric Cantona. At the beginning of the film you feel sorry for him but I hope that by the end you understand him. He has a combination of fragility and then strength and courage at the end that's wonderful, and Steve Evets is just wonderful in that role.

"Stephanie Bishop, too - her real name is actually Bishop, but it's just one of those coincidences - she plays Lily [Eric Bishop's first wife] in the film and I thought she brought a wonderful quality of generosity to it. That's important for the part because not everybody would be able to forgive somebody the way she does. And we had a great team of Manchester stand-up comics as Eric's friends."

Paul also has a lot of praise for Eric Cantona and is sympathetic regarding the pressure celebrities often have to deal with. "They're relatively young when they're footballers," he says, "And to have to go in and face the press the way he did takes a lot of courage. But he also has a great sense of mischief. He was really up for it - he was prepared to laugh at himself. There's that great line 'I am not a man, I am Cantona,' and then of course the trumpet scene - it was great because you saw this amazing footballer and then you saw this absolutely crap trumpet player."

Football is immensely important to a lot of people, especially working class people, but there are relatively few films about that fan culture and what it means to people. I ask Paul what challenges he faced in developing the film with that in mind.

"It's difficult to capture the excitement of a game on film," he admits. "I don't think you can really do that. I remember one time watching Manchester United when they were losing and then it went into extra time and they scored two goals in extra time, and I'll never forget that. You can try to match that drama in a film but you'll always fail. So with this film we tried to concentrate on another aspect of football fandom, which is friendship.

"We included a scene about FC United because I think that's important. They were a group of fans who broke away from Manchester United because they felt it was no longer about what mattered when it was part of an international corporate thing. Many of them who were postmen, for instance, like the characters in the film, found that they could no longer afford to buy tickets to the matches. It changed the culture. Where everybody used to get together to watch matches on Saturday afternoons, suddenly they were being held at nine in the evening to suit Sky.

"Mostly, though, it's that focus on friendship. And it's not just about winning. I think everybody needs something like that in their lives - football can provide a place where you can jump about and shout and even cry."

There must have been quite a bit of jumping about and shouting when the cast and crew discovered that Eric Cantona was actually going to appear in the film. Is it true that they didn't know up until the last minute?

"It's true," says Paul, laughing. "Steve Evets knew that Eric was involved with the film because he was a producer, but we kept the rest of it secret. Ken likes to do that kind of thing to his actors because it's very hard to play surprise, so when you see Eric Bishop looking surprised when he first hears the voice of Eric Cantona and turns round and sees him there, that's real, that was the first thing Steve knew about it. He just couldn't believe it!

"Most of the actors only had parts of the script, though naturally Eric had the whole thing because of his role as a producer. Later in the film [when a shocking incident takes place in the Bishop house] Stephanie had no idea that was going to happen, so her surprise was genuine and she was actually petrified.

"Once people found out that Eric was on the set, the autograph hunters did start turning up, and we had some trouble getting him on and off the set. There are a lot of great footballers but I think there are very few sports people of any kind who have that level of celebrity. But he's a great guy."

One thing readers will be familiar with if they've seen the trailer for the film is the way Eric Bishop's friends use self-help techniques to try and bring him out of his depression. Paul says that he found the inspiration for this when browsing through the self-help section in bookshops (though he admits that sounds rather seedy) and confirms that it was a real book used in the film, with the author kindly giving his permission despite the way it has the piss ripped out of it. "All credit to him. We could have just made it up but I think it's much better like that."

Finally, what do Paul and Ken have planned for their next project?

"We're always thinking about the next film. It's long process between films so we always try to be a step ahead, and I suppose the secret is finding something that we're both interested in. Sometimes it's just a theme that we both have the same sense about. But I think inspiration is a very private thing, it's something that eventually just comes to you on your own."