Eye For Film >> Features >> On The Edge Of Love

On The Edge Of Love

Keira Knightley discusses her new film as it premieres in Edinburgh. 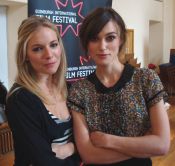 Sienna Miller and Kiera Knightley at the 2008 Edinburgh Film Festival. Photo by Chris.

In any other context, and from anyone else, this might sound a gullible admission. But Knightley’s refreshing attitude to sexuality is quite disarming. She is responding to a press conference question about a topless scene in The Edge Of Love, the ‘he’ being director John Fowler. She elaborates, saying she hates it when actresses leave their bras on in films. The scene is well done. I haven’t heard anyone complain. It makes for entertaining interviews. But at a time when her acting skills are becoming impressive, it would be nice to hear her talk about something more substantial.

When asked about her singing in the film (which, again, is rather good) she replies that she had to have 'a couple of shots of vodka' first. I then asked her about her acting technique. How she approached a particularly emotion-filled scene (moving from holding a dead woman in her arms to Cillian Murphy taking her in his). She brushed it off with, “just following great lines” – casting an adoring glance at her scriptwriter mother. If I’d been quicker off the mark, I would have retorted, “So no acting involved then – you’re just fed the lines?” But perhaps it is Keira Knightley’s way of playing the film star. A sort of modern brunette version of dumb blonde. For at a mere 23 years old she is building formidable celebrity status. I wonder if there might be more to that wide-mouthed smile and slightly amazed look. Is it just the persona? Knightley has succeeded in cleaving a reputation that seems to many out of all proportion to her accomplishments. Only a very few female icons make it by appearing ‘intelligent’. Somehow, intelligent still doesn’t sell as well.

As a lover of poetry and cinema I enjoyed the film immensely. Twice. But both at press screenings. I love the way it makes Dylan Thomas accessible. Its vibrant portrayal of poetry as physical, almost visceral. Yet many reviewers totally ignore the literary aspect. At the public screening, Edinburgh’s star-studded international premiere, I saw a different side. True, Dylan fans were out in force – three ladies I spoke to had journeyed from Carlisle just to see this one film. They queued with tickets for best seats an hour and a half before the start. Yet arty director John Maybury introduces his film about one of our greatest poets wryly. He says, “This is my version of a chick flick.” Which is exactly how it is being marketed. Presumably more folk will pay to see a feelgood melodrama than to be encouraged to think about literature. I try watching it with that mindset. The poetry fades into the background. It becomes nothing more than female bonding, gushings of emotion, and hysterical concerns over who-slept-with-who. Which is a shame. If you watch it as a portrait of the artist’s character it is much more rewarding. And it makes a lot more sense. (Maybury is famous for his portrait of painter Francis Bacon, starring Derek Jacobi and Tilda Swinton – not exactly lightweight.)

But opening nights are about stars. Knightley and co-star Sienna Miller both dazzle on the red carpet, which has been specially lengthened for this event. There are people here from all over the world. The premiere is followed by an exclusive party and the festival gets well and truly underway.