The rain stayed off - just! - as the 61st Edinburgh International Film Festival kicked off.

Hannah McGill, the Festival's new Artistic Director, sported a pearly white dress with plunging neckline and offset with pillar-box red heels, as she welcomed stars of the screen to the Opening Night Gala.

Other guests included new patron Tilda Swinton in a spectacular, shimmering blue two-piece suit. Tilda stars in a couplet of films in the coming days – a major art house release called The Man From London, and a documentary feature called Strange Culture. The sartorially elegant and infamous John Waters, pictured left, charmed reporters and fans as he chatted about his new movie, This Filthy World. 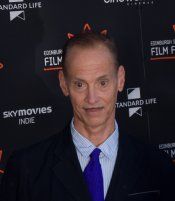 But the main stars of the evening were for the Gala Film, Hallam Foe. Starring Jamie Bell in its title role, it brought him back to the Scottish Festival for the first time since his debut success in Billy Elliot. He was accompanied by other cast and crew members, including the ever-charismatic Ewan Bremner (who has a hilarious cameo in the movie) and Franz Ferdinand, the top selling recording artist who has penned a song especially for the film.

After advance viewings of a humungous number of festival films, this Movie Mole was looking forward to the first screening with a live public audience. There are some astounding movies at this year’s Festival, whatever your tastes. In mainstream cinema, Sparkle, a faultlessly scripted comedy along the lines of Mrs Robinson, is guaranteed to please everyone. Art house fans are in for a treat with iconic masterpieces Phantom Love and The Man from London. Kick-ass music fans will thrill to Control, which is already picking up awards for its blistering portrayal of 70s punk band, Joy Division.

So why did we have Hallam Foe as the opening gala? Programmers at EIFF, for all their innovation and world-class collecting of fine cinema, annually treat us to parochial offerings for the showpiece movie. Ratcatcher, Young Adam, The Flying Scotsman, and now Hallam Foe. All perfectly acceptable homegrown films, but not exactly Trainspotting. To put them in the top spot is like asking a lad next door to conduct the Philharmonic just because he’s a family relation. If not quite downright embarrassing, it suggests an arrogance that Scots have never claimed and that is unworthy of a Festival wanting to be taken seriously internationally. All those films were entered for the coveted Standard Life Audience Award and none of them won.

But all credit to our man of the evening Jamie Bell – when the groundbreaking Billy Elliot competed, it won easily. Maybe audiences know something that festival programmers have yet to learn?

Edinburgh Festival audiences are probably among the most sophisticated and discerning in Britain. Use your vote as you come out of those films – your choices over the years have resounded around the world.

Hot Gossip:
Tilda Swinton is starting work on a new movie in which she plays John Malkovich’s wife. Things to look out for:

Tomorrow: The Man From London. Strictly for cinephiles, a slow moving study in black and white by the revered Hungarian master. Filmhouse 1 @ 7pm.
Sparkle. A galaxy of stars sparkle all the way through this roller-coaster romantic comedy. Cineworld 2 @ 8pm.
John Waters: This Filthy World. The shocking and outrageous pope of camp trash aesthetic reveals all. Cineworld 7 @ 8.30pm (Red Carpet at 8pm)

Mark your diaries now: FRIDAY RED CARPETS: Around 6.30pm outside Cineworld for Control. Bring your cameras and snap the stars even if you can’t get a ticket. They include the gorgeous Samantha Morton.