After a guest appearance in London to kick off the French Film Festival UK there on Thursday, Oscar-winning director Sylvain Chomet headed up to Edinburgh for a gala screening of Attila Marcel.

A large crowd turned out for the pre-film event at the city's Caledonian Hotel, before settling in to watch Chomet's first feature-length live action film, which hinges on the memories of its central, mute protagonist Paul (Guillame Gouix) and which, like all of his films mixes comedy with melancholy. We spoke to Chomet before the screening and will be bringing you the interview in full soon.

The event followed on from the gala screening of Yolande Moreau's Henri the previous night, photos of which are also below. 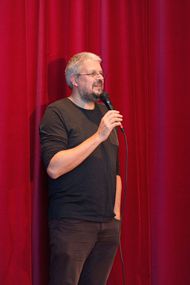