Christmas tree selling has had a recent independent film workout courtesy of Phil Morrison's All Is Bright (originally titled Almost Christmas) but he is out-indie-d by Charles Poekel's low-key but nonetheless absorbing character study Christmas, Again.

Those indie credentials are underlined by the presence of Kentucker Audley in the central role, a writer/director/actor who has been slowly but surely making his presence felt on the indie scene since his 2012 docufiction hybrid Open Five and whose film output is justifiably growing year on year. Here, he plays the aptly named Noel, who heads to Brooklyn each December to sell Christmas tree cheer. This time it is different, though, thanks to a recent split with his girlfriend and a complete change of crew on the day shift.

Poekel - who wrote the play over a five-year period during which he sold Christmas trees in the same place the film is set - keeps things natural, letting Noel's sadness slowly permeate the atmosphere along with the scent of pine needles rather than ringing it out at high volume. He simply lets us feel his melancholy in the way he goes through the routine of presenting and bundling trees, while good camerawork from Sean Price Williams occasionally offers a glance at the joy of a couple expecting a baby or the response of an old folks' home to the Christmas tree arrival - opening a sudden, clear window to Noel's emotions.

Christmas lights twinkle in the backdrop, sometimes blending with or replaced by the other more permanent fixtures of New York or the emergency vehicles patrolling the streets, forming a contrast to the perma-cold nightshift of Noel, who sleeps in the van at the back of the stall by day. Like All Is Bright, the city is reduced to the people within it as they come looking for an "Obama tree" or buy their fir after a dual dialogue with Noel and a bluetooth ghost of a girlfriend.

The story is small, little more than an unexpected meeting with a drunk girl (Hannah Gross) with whom possibilities start to emerge, but Poekel puts it to good use in order to subtly but effectively suffuse his film with the warmth and spirit of the season. It's the small moments of connection - the removal of gum from hair or an unexpected fist bump - that carry weight. This isn't a film where romance blossoms, though it may show green shoots of recovery, or where Christmas comes with all the trimmings - only blackberries are allowed - but it is an effective and affecting consideration of whether you need 'all that stuff' in order to show you care.

The film will be available exclusively on SVOD on Fandor, or on iTunes and other platforms on December 3. 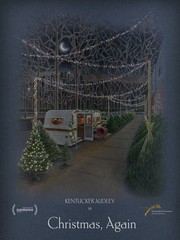 A heartbroken Christmas tree salesman returns to New York, hoping to put the past year behind him.