To celebrate the announcement that Rob Brydon's latest film Swimming With Men, will have its UK premiere as the closing film of Edinburgh International Film Festival, distributor Vertigo Releasing issued a set of images of Rob and his fellow cast, including Rupert Graves, Daniel Mays, Jane Horrocks and Thomas Turgoose, getting in the swim.

The film - which opens in Germany in June and will open across the UK on July 6 - stars Brydon as accountant Eric Scott, who finds himself in the throes of a mid-life crisis. After he joins an all-male group of synchronised swimmers, he discovers that making patterns in a pool can, for a couple of hours at least, give him escapism from the bumps in his work and marriage.

The ensemble cast also includes Adeel Akhtar, Jim Carter, Charlotte Riley, Ronan Daly and Chris Jepson. Initially the men in the swim team keep their personal lives in the locker, but the ramshackle squad and coach Susan (Riley) slowly begin to reveal their inner lives, as well as their paunches. But can they get their routines, not to mention their lives, in sync as they embark on an unlikely journey to Milan to compete in the World Championship?

Swimming With Men is directed by Oliver Parker, whose previous films include Dad's Army, An Ideal Husband and Dorian Gray. It is scripted by Catherine Tate Show writer Aschlin Ditta, who also penned Scenes Of A Sexual Nature.

Speaking about the film's gala slot at Edinburgh, Parker said: "I can’t think of a better place for our intrepid swimmers to take the plunge.”

Click an image below to view a larger version. 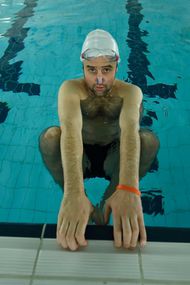 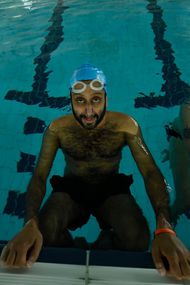