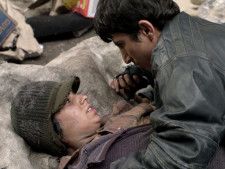 Currently in its 18th year, it brings together documentary and fiction films with the intention of galvanising those who watch them to join those taking action against injustices many face every day.

This year's London arm of the festival runs from March 18 to 28 at cinemas including the Curzon Soho, Curzon Mayfair, Barbican and Ritzy Brixton. It will open with Dangerous Acts Starring the Unstable Elements Of Belarus and close with Return To Homs.

First To Fall
Documentary showing how Hamid and Tarek leave their lives as students in Canada and travel to Libya, their homeland, to join the fight to overthrow Muammar Gaddafi.

Watchers Of The Sky
An exploration of genocide and attempts to criminalise it internationally.

The Mulberry House
After 10 years in Scotland, Sara Ishaq travels back to her childhood home of Yemen and takes her camera along.

An Episode In The Life Of An Iron Picker
Life becomes desperate for a scrap merchant when his pregnant wife needs medical help they can't afford.

Return To Homs
Documentary about rebel fighters in the besieged Syrian city.

Dangerous Acts Starring The Unstable Elements Of Belarus
Behind the scenes with the Belarus Free Theatre, an acclaimed troupe of imaginative and subversive performers who, in a country choked by censorship and repression, defy Europe's last remaining dictatorship.

For Those Who Can Tell No Tales
An Australian tourist finds a trip to Bosnia changes her life forever.

The Square
Examination of the revolution in Egypt, from the perspective of a group of activists.

Before Snowfall
A youngster from Kurdistan tracks his sister across Europe after she flees before her wedding.