The trouble in Syria may have been knocked off the news, at least temporarily, by events in Ukraine but this intensely personal and shocking documentary about the besieged city of Homs as a sharp reminder of the trouble there. It is estimated that at least 3,000 people were trapped in the city for 18 months (around a quarter of a million are estimated to be under siege across the country, at the time of writing, according to Human Rights Watch) and although UN evacuations have finally started to happen, this in no way lessens the film's message.

First-time director Talal Derki brings an intensely personal note to this documentary which shows how the peaceful protests of young revolutionaries in this city - dubbed "Homs the audacious" - slip inexorably towards violence as president Bashar al-Assad's troops become increasingly brutal and they increasingly radicalised.

Derki has created a hard-hitting combination of the poetic and the violent that stands firmly behind the revolutionary cause - this is a cri de coeur that plunges us into the situation rather than an impartial overview. It is also a tough watch and Derki does not pull his punches, with images of the aftermath of torture in a hospital and dead children among the atrocities on display.

Although gruelling, the film also presents an emotional response to what is happening, with Derki articulating in voiceover the felt by his comrades as they come to form the opinion that "peaceful resistance is futile". His prime human focus is Basset, an ex-goalie for the national Syrian football team, who emerges as a natural leader in the Free Syrian Army, of and for the people. He leads from the front but, as the violence grinds on, we see how the constant conflict and loss of friends causes even the most durable to feel a level of depression.

Derki's main focus is on the bigger picture, however, rather than just one or two activists and his film is at its most powerful as he roams the bombed out city. Walking the street is almost impossible due to snipers, so those trapped there have knocked through the internal walls of the buildings in order to run undercover from house to house. It's not just the bloody scenes and shootouts that hit home but the quieter moments, too. When we see a little boy by the side of a man, we can only wonder what, if any, future is in store for this innocent victim, caught up in a conflict he may never grow old enough to understand. If there is a failure here, it's that we don't see enough of the general populace. Many women were trapped in the city, for example, yet their voices are undocumented here.

The film has been impressively edited by Anne Fabini, so that despite the inevitable rough and ready nature of some of the footage captured under fire, the end result feels taut and cohesive.

Derki is a man on a mission with a message for those outside Syria. "The world watches as we are murdered, one by one, while it remains silent as a graveyard," he says. This sort of wake-up call could well rouse the dead. 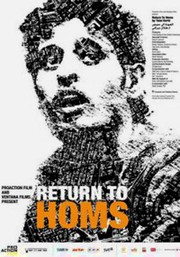 Documentary about rebel fighters in the besieged Syrian city.