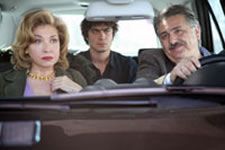 A special screening of Eden Is West opens the festival

This international film festival aims to showcase the stories of activists and survivors from across the globe. Now in its 13th year, it brings together documentary and fiction films with the intention of galvanising those who watch them to join those taking action against injustices many face every day.

The festival runs in London from March 18 to 27 and then travels on to New York, where it will run from June 11 to 25. It will also tour several other cities. Among the films screening is Tribeca award-winning film Pray The Devil Back To Hell.

Firaaq
The story of how the Hindu-Muslim riots that ravaged Gujarat in 2002 altered the lives of a number of different characters.

Back Home Tomorrow
The lives of two children touched touched by war.

Kabuli Kid
A Kabul taxi driver finds himself looking after an abandoned baby.

Pray The Devil Back To Hell
The story of the Liberian women who came together to bring peace to their country.

In The Holy Fire Of Revolution
A year on the campaign trail in Russia with the world's greatest chess player.

Eden Is West
Odyssey of a migrant in search of 'paradise'.

Crude
The inside story of the “Amazon Chernobyl” case in the rainforest of Ecuador, the largest oil-related environmental lawsuit in the world.
A-Z of Human Rights Watch Film Festival 2009 reviews >>>