Watchers Of The Sky

Personalising big issues with real-life stories without simplifying the wider point is a tricky balancing act. But documentarian Edet Belzberg proves to be a master plate-spinner with Watchers Of The Sky, which looks at the origins and work of the International Criminal Court in The Hague, the notion and coining of the term 'genocide' and the backgrounds of those who feel driven to further the cause of worldwide human rights.

Key to the structure's success is the use of the story of Raphael Lemkin, who acts as a lynchpin. His name is not a household one and though he was nominated for a Nobel Peace Prize seven times, he never won plus, depressingly, less than a dozen mourners attended his funeral. Yet, this Polish Jew - who fled to America as the Third Reich began to rise - dedicated his life to trying to call those guilty of war crimes to account and coined the word 'genocide'.

The phrase 'history repeats itself' could just as easily read 'atrocity repeats itself' as Belzberg shows how Lemkin recognised early on that there was, as he put it, a line of blood stretching from the Roman Empire to the present. Here Belzberg takes five examples of genocide that range back little more than a century - Armenia, the Nazi Holocaust, Kosovo, Rwanda and Sudan - to show the cyclical nature of violence and what happens when the world turns its back.

In addition to Lemkin, she also looks at the life and work of people currently fighting for better justice for those in peril on our planet. American Ben Ferencz, who has spent 50 years lobbying at the UN to make the crime of aggression - war-making - prosecutable by the ICC; Pulitzer Prize-winning author Samantha Power, who was galvanised to war reporting by the Kosovan war; then ICC chief prosecutor Luis Moreno Ocampo; and UN Refugee Agency field director Emmanuel Uwurukundo. Each has their own story to tell and their own battleground, which Belzberg intersperses with the story and writings of Lemkin.

As footage of Lemkin is severely limited, she opts instead to use his written words, accompanied by animation by Molly Schwartz, Dana Schechter, Garry Waller and Eyal Ohana. The animation takes form as we watch, a fitting metaphor for the state of international law in the area of human rights, which is very much a work that is still in progress. Ferencz and Ocampo, in particular, are under no illusion about the magnitude of the battle they face to get countries to look beyond their own immediate political interests for the greater good. As Ocampo puts it, when he comes under international fire for issuing an arrest warrant on charges of genocide for Sudan president Omar al-Bashir - who incidentally, is still globetrotting with impunity, since no country has seen fit to arrest him - he has to "just be impartial and keep doing your job".

The technique used does mean that there is quite a lot of onscreen reading to be done as well as watching but the passages of Lemkin that Belzberg chooses are always well-illustrated either by the animation or archival footage. Importantly, she gives refugees a personal voice in the film, through a mother of three sons who has fled Sudan to a camp in Chad. The mother explains how when she arrived she was on the edge of the camp but now finds herself in the middle of it as more and more flee the genocide. She also talks about the "total humiliation" about being reliant on handouts and of her fears that her sons will get sucked into the violence because, in the absence of world intervention, they see themselves with little option but to fight or die. This suggestion of a cycle of war within the cycle of genocide underlines how important it is to bring the perpetrators of these unjust conflicts to account.

It's interesting to note the strength of labelling slaughter as "'genocide'- with politicians squirming to avoid its use on occasion. "The global community is very primitive," says Ocampo. Given how little seems to have changed for the better since The Reckoning: The Battle For The International Criminal Court was made in 2009, let's hope it doesn't take us another 50 years to evolve enough to ensure justice for those threatened by their own governments. 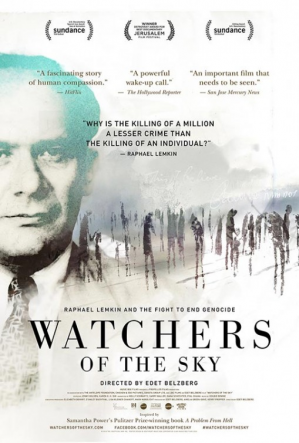 An exploration of genocide and attempts to criminalise it internationally.

Keepers Of Memory
The Reckoning: The Battle For The International Criminal Court