“If there was no singing, then the world would be silent,” says a little boy at the start of this audience award-winning documentary which shines a light on the social fabric of post-Taliban Afghanistan.

The idea of no singing does sound rather absurd, but under the ultra hardline Taliban rule in 1996, it became a crime to dance, listen to music or watch TV. By the time the restrictions were lifted, a very different country had emerged. Inevitably, many broadcasters sprang up to fill the televisual vacuum and one of the frontrunners was Tolo TV, who, taking inspiration from the likes of Pop Idol, instigated a talent show called Afghan Star.

It would be easy to dismiss this as simply an import of fluffy popular culture but as this film shows, there is a far more serious side to the programme, which came to offer the equivalent of sermons in democracy and unity from the pulpit of pop and, as a result, also became a focus of hatred for those mourning the passing of the Taliban regime.

Havana Marking’s documentary mixes the ‘who will win?’ tension of the likes of Spellbound and Doubletime with the sort of social documentary backdrop depicted in Enemies Of Happiness to great effect. We are given the opportunity to root for one of four contestants who make it to the final 10 of the competition. As one of the producers enthuses about the show, we are told they started off with 2000 hopefuls and “even three women”, which goes a long way to showing how far sexual politics had been wound back by the Taliban rule.

Of the three women, amazingly, two make it through to the final 10. Lema Sehar, a demure and surprisingly shy 25-year-old from the ultra-traditional Kandahar region and rebellious Setara Hussainzada, from Herat, who is proud of her “open mind” and unashamed to dance despite putting herself at risk of reprisal by doing so. They are up against Darius Danesh-alike Rafi Nabaazda, from Mazar e Sharif, and the classically trained Hameed Sahkizada, from the Hazara ethnic group, which were particularly targeted by the Taliban.

As the film progresses, it becomes not the activities on the stage each week that hold the attention, but the storm of controversy that builds around the show. On the one hand, everyone is watching it, on the other hardliners are preaching hatred against it, and when Setara removes her headscarf onstage, she suddenly finds herself in fear for her life.

Although not breaking new ground in terms of the way it is shot and edited, this is a compelling story and features some excellent archive footage, reminding us of the state of the Afghanistan nation back in the Eighties. It paints a skilful picture of what life is like there today while also allowing us to get to know the main protagonists more intimately. It also shows the vast difference which exists between those living in the much more liberal Kabul and those in places such as Kandahar where “everything is secret”.

What stays with you, however, is the steadfast defiance of the people of Afghanistan as a whole. Despite the political power being brought to bear, the death threats and the climate of fear many, especially in the provinces, are enduring, people are willing to stand-up and be counted. “I’m not scared of the Taliban,” says one woman who has gone out without a headscarf. Afghan Star’s presenter puts it more simply: “I want to say the Taliban is finished.” By the end of this documentary it is clear there is life in that particular old dog, yet, but also a well of optimism among this beleaguered people that refuses to run dry. 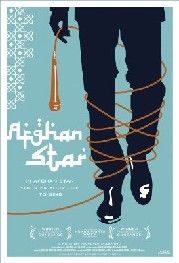