All those who, in the storm of polemics from the likes of Michael Moore and 'personal journey' factual films by people such as Morgan Spurlock, may have forgotten what a proper, balanced documentary looks like, should make sure they take a look at the latest from Joe Berlinger (Metallica: Some Kind Of Monster).

Taking on the tricky subject of one of the largest and most controversial legal cases in history, he charts the progress of courtroom attempts to get redress from Texaco (and by extension Chevron) for the aftermath of oil drilling in Ecuador. Berlinger documents the state of the Ecuadorian rainforest and the people of the region, who, the film atests, are bearing the brunt of Texaco's failure to clean up after itself. There are around 30,000 people living under the rainforest's canopy, reliant upon it for their existence, but now many are suffering from a multitude of health problems – from cancer to birth defects and skin ailments – which lawyers representing them say can be laid at the feet of the oil company's pollution.

It is true that Berlinger is clearly on the side of the indigenous populace in all this, in his director's statement he says he left his first trip to the area "feeling sick - literally, from the noxious fumes I ingested - and figuratively from the things I saw and stories I heard". But after the overwhelming weight of evidence in this documentary it is unlikely there will be a queue forming to join the Chevron camp. Despite this, unlike so many other filmmakers, he remembers the golden rule of documentary: right of reply. It is a very clever move, since, in airing the opposing viewpoint, through the use of the petroleum giant's videos and spokesmen, he gives Chevron just enough rope to hang itself with.

Here, he gives a face to the bigger issues by keeping his focus chiefly on 35-year-old lawyer Pablo Fajardo, who despite living in what can only be described as humble circumstances, is leading the case against Chevron with the help of a hot-shot US pro-bono lawyer's firm. And what a case it is. Running since November 1993, it has been subject first to legal wrangling in the US, before Chevron won the battle for the bandwagon to be moved to the courts in Ecuador, in 2002, where extensive evidence-gathering began in earnest.

Shot over a three-year period, Berlinger documents the evidence phase of the case, at the same time as exploring the more personal stories of those affected by the polution. All the way along, he lets Chevron deny involvement, although the physical evidence tells a quite different story. While possibly focussing a little too much on Fajardo's burgeoning fame in America and a visit from Trudie Styler at the expense of the more hard-hitting personal stories from the region, these are small grumbles which don't detract from the fact that this is a well-balanced and thought-provoking documentary that doesn't forget that the cinemagoing experience needs to entertain as well as educate. 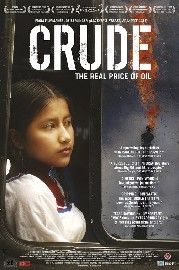 The inside story of the “Amazon Chernobyl” case in the rainforest of Ecuador, the largest oil-related environmental lawsuit in the world.