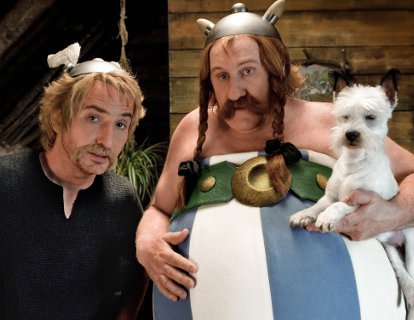 Astérix and Obélix: God Save Britannia opened the festival

It's party time for the French Film Festival as it celebrates 20 years of the bringing the best of Gallic film to the UK in 2012.

Featuring films from France, Belgium and Canada, the festival will run from November 8 to December 2, opening with gala screenings of Astérix and Obélix In Britain. The festival will also host a career retrospective of Belgian filmmaker Chantal Akerman.

The festival will screen films across the country, with venues in Edinburgh, Glasgow, London, Aberdeen, Dundee, Inverness, Bo'ness, Kirkcaldy, Bristol, Manchester and Warwick.

Renoir
The old age of the artist, exploring his relationship with a model and his son.

Step Up To The Plate
The story of Michelin starred chef Michel and his son Sébastien, as father prepares to hand over the running of the restaurant to his son after a 15-year apprenticeship.

The Suicide Shop
In a town of depressives, one family has found a suicidal niche.

Mobile Home
A pair of old friends embark on adventure in a camper van.

Laurence Anyways
A teacher and aspiring writer in Nineties Montreal tells his girlfriend he wants to live as a woman.

Ernest And Celestine
The unlikely friendship between a gruff bear and an orphaned mouse worries authorities who believe the species shouldn't mix.

Our Children
A couple's relationship becomes strained under pressure from one of their adoptive parents.

Painting a life
Gilles Bourdos on Christa Theret in conversation about Renoir.