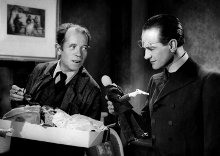 The Murderer Lives at 21

Highlights this year include The Glories of Gaumont - a three-film tribute to the French studio which celebrates its 120th anniversary this year, including Henri-Georges Clouzot's The Murderer Lives At 21.

Diary Of A Chambermaid
An alert servant works for a wealthy couple in rural France.

My King
An injured woman in a rehabilitation centre recalls an all encompassing love.

The Last Diamond
A thief on parole agrees to one last job.

Tokyo Fiancée
A young Japanophile Belgian woman in Tokyo falls into a whirlwind romance with a Francophile Japanese student.

The Murderer Lives At 21
An inspector tries to catch a serial killer.

The Clearstream Affair
Finance thriller, based on the real exploits of Denis Robert – an investigative journalist who spent years tracking the illicit activities of the Luxembourg-based Clearstream bank.

Chorus
A marriage torn apart by the disappearance of a child is reconnected as events offer closure, resurrecting emotions and a kind of hope

All About Them
Love triangle romcom.

Zarafa
A young boy, a prince and a balloonist escort a young giraffe halfway across the world, having adventures on the way.
A-Z of French Film Festival 2015 reviews >>>

King of hearts
Maïwenn and Louis Garrel on strategy, truth, destructive love and My King.
A personal view
More from Arnaud Desplechin about My Golden Days.
Golden boy
Arnaud Desplechin on My Golden Days (Trois Souvenirs De Ma Jeunesse).
The real world of Vincent Lindon
Cannes best actor on career and causes.
Making a killing
Frédéric Tellier talks about watching the detectives and making SK1.
Baye and the Beast
Nathalie Baye on the mysteries of a murderer and SK1.
The wild ones, part 2
More from Cédric Kahn: on Wild Life, Miss And The Doctors and monkeying around.
The wild ones, part 1
Cédric Kahn on haircuts, fantasy, childhood and Wild Life.