Robert Redford on embracing change, documentary Who Is Dayani Cristal? and Crystal Fairy 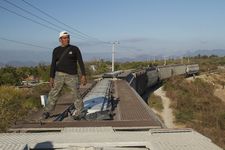 First up - Who is Dayani Cristal?

The festival, as always, kicked off with a message from founder Robert Redford, this year insisting that change can do you good - if you let it.

Speaking ahead of the opening night, alongside Sundance Institute Executive director Keri Putnam and Festival Director John Cooper, he said he thought change could be divided into three sections.

He added: “Since it’s inevitable, some people fight it and resist it because they’re afraid of it. Other people accept it and roll along with it. And then there's another group who see it in a positive way, that they can take advantage of change and not only go with it and use it. And I think that's where I am and always have been and I think that's where Sundance is."

Redford also touched on a paradox he's faced since he founded the festival.

"It was always curious to me, since we've been supporting independent filmmakers for 30 years, that no one ever asked me to be in their film," he said "I could never work out why - did they see me as a main stream guy or think I'd retired or what? Then along comes JC Candor after we premiered his film Margin Call. He calls me and says, 'I've written a script with you in mind.' I said, 'Really, who's going to play me?' He said, 'You'. I was so excited. So I did it [the resultant film is called All Is Lost] and there's no dialogue in the film, which made it extra special."

Press conference done and dusted, it was time to get down to that business they call film and I decided to go with a Silver/Silva Cristal/Crystal combination.

Illegal migration documentary Who Is Dayani Cristal? is disappointing. The premise of using a single person's story to illustrate the plight of many can be a very effective way of getting an audience to wake up to an issue - in this case, the fact that every year 200 people die trying to cross the Arizona desert into America. In addition to 'recreating' the hunt for the identity of a man found dead in the desert, Gael Garcia Bernal retraces his steps from Honduras, talking to other migrants along the way, while a third aspect of the film focuses on the John Doe's family. This all sounds as though it should make for a gripping doc but despite some interesting observations from the team tasked with identifying bodies found in the desert, the film never really comes together. Director Marc Silver's time in TV was unfortunately all too evident in the way that certain points are recapped and laboured - as though he is anticipating ad breaks to come - and Bernal, well-intentioned though he may be, serves as more of a distraction than an illustration. It's also hard to tell where the re-enactment stops and reality starts, while a refusal to offer up any sort of solution to the problem feels like a cop out.

Crystal Fairy (named as Crystal Fairy & The Magical Cactus And 2012 in the credit sequence) also charts a journey but this time with a much more upbeat vibe. Jamie (Michael Cera) is about as self-centred and objectionable as it is possible to be with just one body. Travelling in Chile and focused more on drug 'experiences' than actually engaging with anyone, he has nevertheless managed to acquire a nice Chilean buddy (Juan Andrés Silva) whom he doesn't deserve. When Jamie, high on drugs, invites a hippy chick he has only just met, named Crystal Fairy (Gaby Hoffman), along for a mescaline taking session on a far flung beach, the trip he intends is entirely different from the trip he gets. Sebastián Silva sets the film up economically and there is plenty of humour at Jamie's expense. Cera knows how to sell a comic line but it is Gaby Hoffmann who really delivers the film's emotional goods as the action starts to pick at notions of friendship and the importance of feeling comfortable in your own skin. It may meander too much, but the journey the characters are taking is an interesting one.

You can watch the opening press conference in full, here.