Eye For Film >> Features >> Skype is for the Birds

Skype is for the Birds 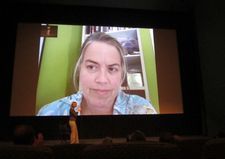 Skype, when you overlook small interferences, makes it possible to hear what the filmmakers have to say, on the same screen that had just held their works of art.

With the large heads, I can't help being reminded of Woody Allen's hilarious segment called Oedipus Wrecks in New York Stories (1989), in which his character's mother floats in the sky over New York.

The filmmakers, on the other hand, don't know who is asking a question. "I can't see you," said Marina Zenovich meaning us, the audience at the press conference.

"I had no idea it would become a political thriller - a lot of people wouldn't talk to me," she explained, clarifying the difference between Roman Polanski: Odd Man Out and her first film about the Polanski case.

"Now I would like to make a romantic comedy." Instead, Zenovich is working on a project about Richard Pryor, "another difficult man with the initials RP," she joked.

Zenovich ends her film with a song by Emmanuelle Seigner, who croons "call me - forget me not." I asked the director about this entrancing and somewhat puzzling choice. She told me she liked the tone of the song, and that she also ended her earlier film with a song by Polanski's wife, who, at that time, she was surprised to find out was a singer. "It captures what they went through."

"You make a choice when you cut," even if the audience doesn't notice it, "you know you make a choice." Editing influences the truth of what is shown on the screen. His film about exorcism, Beyond The Hills, is the opposite of a curiosity parade.

Mungiu spoke about Romania as "a country that claims to be very religious … that is supposed to mean caring for the other, not going to church regularly." Beyond The Hills is more about guilt and freedom than about misconduct in an individual convent. Freedom has to include "the education people need before they can make decisions. Otherwise the freedom is incomplete."

I asked the director about his decision to change the season from June (when the "real" events took place, as told in Tatiana Niculescu Bran's non-fiction novels) to February, and how the passing of time falls into timelessness. "Easter was coming, the most important feast," he explained. "People were starting to crowd up at the church." Exorcism is not exactly a public spectator sport.

Although Christian Petzold announced that he had a dictionary and cigarettes next to his computer, we got to see neither in action during the Q&A about Barbara. On that same note, he described how he felt like Rock Hudson in a Douglas Sirk movie, with everybody smoking in the children's ward of the hospital, set in 1980 East Germany. He gave insight into the gendered workings of the GDR, where punishment for female doctors meant sending them "to the outskirts" and for male doctors it meant the military.

Petzold calls what happens in his film a "political seduction," and maybe "they will build up a new society, maybe a bubble for two or three people" to do good in that hospital at the end of the world by the Baltic Sea.

"No one wanted to buy this show" Bonello said of Ingrid Caven: Voice and Music; that is why he filmed the second of only two shows performed at Cité de la Musique in Paris. He decided not to have subtitles: "It would have taken away from it," now "she comes on stage, then disappears." Fassbinder star Ingrid Caven remains an enigma.

I asked the director about a particularly haunting song. "One desperate night, Fassbinder has written me a macabre song," she introduces it in the film and states that this was the first time she ever performed it. "Is the family in the song eating the son for dinner?" is a question you don't get to ask very often at a press conference. "Yes, they are," he confirmed and quickly compared her face to the sun coming out of the night.

Out of the shadows Leroy Kincaide on sleep paralysis, his past as a wrestler, and The Last Rite

The feeling of community Lila Schmitz on The Job Of Songs, storytelling, community and the Cliffs of Moher

Beauty is where we are Bruno Dumont on France, Charles Péguy, composer Christophe and going into space