Eye For Film >> Features >> Getting Carter 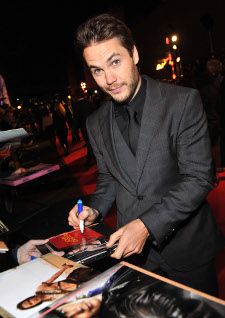 The vibe between John Carter’s cast and crew at the press conference at The Corinthia Hotel in Whitehall is positively joyous. Refined beauty Lynn Collins lets out an ear-splitting cackle after Willem Dafoe deadpans, “I’m not fluent in Thark [the fictitious language spoken by Barsoom/Mars inhabitants] but I can get by.” Yet for all the light-hearted asides – Taylor Kitsch is in particularly playful form – it’s clear that everyone in this room has taken John Carter to heart.

Dafoe had been explaining his response to the various challenges posed by playing a Jeddak Thark – a four armed, 15ft, tusked, green Martian king. As well as learning the language, it was necessary to walk around on 9ft stilts. But the actor, playing against type here as a goodie, took it all in his lengthened stride. “ You take that newness and you apply it to the character. You can invest that character with a kind of energy, a kind of curiosity which it didn’t have before so you kiss those stilts because that’s a gift they gave you.”

Ah, positivity, helpful when you spend most of a film flying through the air doing stunts, intermittently being attacked by ferocious white apes. “There were times when I personally thought you had a vendetta on me,” says Kitsch in his deep Canadian drawl to director Andrew Stanton. After the laughter, he addresses the audience, “He [Stanton] made a great point when we were filming, I don’t know if it was to motivate me or what…‘the more we beat you up, the more you’re going to be liked’.”

There are few reasons not to like John Carter, the Virginia cavalryman who finds himself transplanted to Barsoom/Mars where, amid Martians on a sliding scale of nice to not so nice, he meets a feisty, foxy princess (Collins) who causes him to question his homing instinct. Created 100 years ago by Edgar Rice Burroughs, Carter is everything an action hero should be: brave, chivalrous, and armed with a gruff sense of humour.

Of course these characteristics are hardly novel and have evolved to be something of an action trope. Stanton, who has been a fan of the Barsoom series since boyhood, is asked how he feels about Burroughs’ work being “plundered”. Stanton is emphatically philosophical.

“Plundering is a harsh word… it’s the sort of influence that The Beatles had. That’s what great art does. It inspires other artists to do great art. There’s nothing that you like in this world that wasn’t influenced by a bunch of key things. Nothing came completely clean out of a vacuum. I can be a fan and know that book from the first sentence to the last and not feel like I’ve seen it actually robbed. I felt there was always room to literally put the book on the screen.”

To counter the fact that John Carter and Dejah Thoris have become archetypes in the century since Burroughs created them, Stanton says he developed their backstories and fleshed out their relatability. “Cliches come from something that actually works but when they’ve been abused then they become a cliché and that’s off-putting.”

This is the first time that Stanton, who wrote and directed Pixar successes Finding Nemo, WALL-E and A Bug’s Life and wrote the Toy Story trilogy, has made a live-action studio movie. “I felt like I was let outdoors for the first time in 20 years.”

It’s obvious why he chose this particular project to make the crossover from animation to reality. “Making movies, no matter what kind of movie or what the subject matter is, is just hard. It’s wrong more times than it’s right. What the heck’s going to get you out of bed each day and face it? It’s got to be something you love so much. I couldn’t think of anything I loved more.”

John Carter is out on general release in the UK now. Watch a clip from the film below

To watch this video, you need the latest Flash-Player and active javascript in your browser.
Share this with others on...

Dating Amber Judy And Punch No More Wings Only The Animals The Collini Case A Rainy Day In New York Parkland Rising Two Gods The Half Of It The Vast Of Night End Of Sentence To The Stars Pandora Castle In The Ground The County Skull: The Mask Lorelei The Wanting Mare Heat And Dust Soundwave