Eye For Film >> Features >> Is our greener future a gas?

Is our greener future a gas?

Director Gregory Kallenberg talks about the energy implications of his documentary Haynesville. 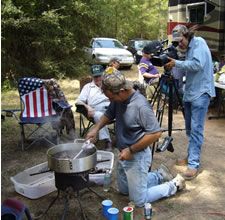 Gregory Kallenberg at the squirrel cook-out

US documentary Haynesville premiered at Sheffield Doc/Fest last month. Now, the film - which tracks the discovery of the United States' largest natural gas field and the find's implications both for the local community living on top of it and for a country attempting to move to a greener energy future - has been selected to show as part of the United Nations Climate Summit in Copenhagen.

"It was a bit of a surprise to us," says director Gregory Kallenberg. "They called and told us about a film programme they were presenting and asked if we would be interested in coming over and showing our film. I thought about it for, let's say, 1.53 seconds and accepted. It's a huge honor to show Haynesville at the Climate Summit."

The film will screen on Monday December 14, at 5pm at Pressen, Politikens Hus and Kallenberg will be there to talk about it.

"They are having a Q&A after the film," he says. "I hope the idea is to spark conversation and discussion about the issues in the film. I was very careful to make sure that Haynesville was a balanced look at the macroscopic and microscopic issues of energy. I hope I get a chance to explore that with the audience."

Kallenberg - who was a journalist before swapping his pen for a camera - says as a writer he always liked personal stories that embodied bigger issues, and he certainly stumbled on the motherload in Haynesville. The presence of the gas - known as the Haynesville shale - meant that some of the local community, including good ol' boy landowner Mike Smith, became millionaires overnight. Others, however, found they were being offered a less than impressive deal for their smaller patches of land.

"The original idea of the film was to capture the human side of the discovery, " says Kallenberg. "To really dive into the 'gold rush' mentality.

"I was working on a different project in Louisiana and was sitting in a cafe and heard these farmers discussing a gas well. The way they were talking about it was hilarious. It was like something out of the film Giant. The more I listened, the more I was intrigued. Before I knew it, I couldn't go anywhere in Shreveport, Louisiana, and not hear about the "Haynesville shale" and how it was going to make everyone rich. That's what hooked me: the drama, the fervor, the greed and the promise of the Haynesville shale.

"I started at the beginning of the boom, so I had a multitude of subjects to choose from. Money does amazing and horrible things to people, so I looked for subjects that weren't just benefiting from the Shale, but folks that were deep in character and ones that embodied all parts of this historic event."

One of those shown to have the deepest character is Kassi Fitzgerald, a single mum who on realising that some of her neighbours are being railroaded by the energy companies, takes it upon herself to be a crusader for the little guy.

"She's an amazing person," says Kallenberg. "She was homeless, barely got through high school. She worked as a waitress to get herself through nursing school. And now she's a single mother with an autistic child and adopted an abused child. On top of all that, in the film she's attempting to help her downtrodden community retain their environmental rights. We should all be more like Kassi."

The personal stories are strong, but some of the environmental and economic implications for the country are, arguably, even more compelling and Kallenberg found his project soon came to embrace these as well.

"It was once this energy find became as huge as it is that I realized Haynesville could be so much more," he says. "That's when I dove into the macroscopic side of things."

The macroscopic side of things is, as with most energy issues, extremely complex, although Kallenberg uses a gamut of diagrams and academic testimony to explore what the discovery of the shale means to the average man on the street. To put it in layman's terms, the amount of gas it contains could provide all the energy America needs for nine years, without any need to supplement it from any other source. Not only is it immense, it is also vastly greener than the two chief sources of US energy - oil and coal, producing 30 per cent less carbon dioxide than the former and a whopping 50 per cent less than the latter.

"Our goal was produce a film that was balanced and, looking at the energy picture, took the viewer through a methodical line of thinking," insists Kallenberg. "By that, I mean I wanted to look at current energy sources, the possible alternatives and their timeline and, ultimately what we can do now. That meant coming up with a strategy on finding experts. I was adamant that I didn't want anyone from the oil and gas industry in the film. That left with us with having to find scholars, pundits and environmentalists who could speak to the issues. The resulting group has a much greater impact in carrying the message of the film.

"The experts themselves were very willing to be part of it. I believe a lot of them felt that no one has addressed the energy issue in a rational way. It's neither a negative hardcore enviromental impact piece nor a industry puff piece."

But wasn't it tempting to give the corporate giants enough rope so that they might just hang themselves? Kallenberg wanted to take a different tack

"It's always tempting to let the oil and gas industry hang themselves, but that has been done over and over. I really wanted to rise above and look at the bigger issues. We all use energy and it's important that we see where it comes from and understand the potential impact of finds like this. To me, the drilling of the well interstitials is where the viewer gets to look inside the sausage factory of energy. I wanted that side of the film to be more artistic and allow the viewer to make up his own mind."

When it comes to his own view on the situation, however, the 42-year-old director's mind is made up.

"I do have a view, and that view was developed by making this film. In short, I believe natural gas is the way to go to help ensure a greener energy future. It's cleaner and, in my opinion, is the only way to a green energy future. Also, I want to see the world start to get off coal as soon as possible, I want to see superpowers put more money into the development of renewables, I want to see more attention paid to conservation of energy and, ultimately, I want to see a brighter energy for all of us.

"At the same time, as we continue to develop these finds [in the US, Europe and China], I want us all to look at the human cost of energy and try to find ways to lessen that impact.

"My journalism background was handy in keeping me from being an activist. I had no agenda in the making of this film. And I had to gut check myself to make sure that I was properly supressing my want to be more active. When you see the film, you'll understand how hard it was not to jump in and help Kassi or to intervene with Mike [the overnight millionaire] and beg him not to buy some of the things he buys - or, for that matter, not to eat that squirrel."

Ah yes, the squirrel. It turns out that eating the unexpected can be called for in a documentarian's line of work. Those contemplating adding it to their Christmas menu, however, may want to take note.

"They taste like greasy, dark meat chicken that's been left on a log in a damp forest for a day or so. Not something I want to eat again, but the ritual of the hunt and the cooking of the squirrels was a really important part of Mike's character and also the relationship I had with Mike."

Now Haynesville seems to be gathering an energy of its own, after generating plenty of word of mouth at Doc/Fest.

"Sheffield was an amazing festival," says Kallenberg. "The size was perfect for us. We're indie filmmakers with little to no marketing dollars, so smaller means we can have a better impact. We were very lucky there and became a bit of a 'buzz' film. That led to some amazing meetings with agents and distributors. I'm not sure we could have done that at some of the mega fests. Hopefully, Sheffield is the beginning of a successful and, ultimately, lucrative run for Haynesville.

"The hope is have a boffo North American premiere at SXSW or Tribeca. Then, we hope to show the film globally through theatres and television. Then, I want to get back out and start another project. I'd like to do more in the energy realm. There's a lot more story to tell. Especially in Europe where they just found the same shale that is in the film."

As for the people in the story, though, it's less easy to move on.

"It's hard to know when to take the brush off of the canvas," he says. "It's frustrating when life keeps happening. Kassi's story especially made me feel that way. In fact, and I don't want to give anything away, the ending for Kassi came about during a casual 'checking in' conversation while we were editing.

"I talk to her fairly often. It's interesting. I called her to ask her if people were asking when the film was coming out. She was very frank (she's like a stern mother -- she feeds me, gives me life advice, etc) and told me that no one is asking about the film because they were working to hard to stay above water. She said that the people in her community were too busy trying to keep their jobs and pay their mortgages. It was a pretty sobering revelation."

Sobering or not, it seems Kallenburg has energy and appetite, squirrel notwithstanding, for much more in the future.

For more information about the film, visit the official site.

West Side Story The Panola Project Call Jane Am I OK? Three Minutes: A Lengthening Nanny Nothing Compares Last Night In Soho All That Breathes The Power Of The Dog Rifkin's Festival Living Riotsville, USA Procession The Harder They Fall Memory Box Tantura Nightmare Alley The 355 Deerwoods Deathtrap