We sniff out some great comedy at the Edinburgh Film Festival. 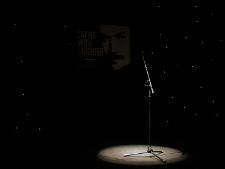 The loneliest place in all entertainment...

As cherry-picked from what's left of the press screenings - the film of the day was Le Donk. A fine entertainment about a washed-up talentless rocker who gains a prodigy rap-artist as his sidekick, improvised from about half a page of script. It's an insubstantial film, but very funny, and director Shane Meadows continues his unbroken run of good material.

An Evening With Don Hertzfeldt was spectacular - please don't ask me to review the films, I'm only just starting to process them. Needless to say, one set of Bitter Films DVDs are on their way. One audience member in the Q&A said that she was about to have an anxiety attack. And yes, they are fearsomely good - I know not what prior events in Hertzfeldt's life helped him mine such psychological inspiration, but the films have an emotional truth and storytelling complexity that defies convention. From the sheer skill required to create the incredibly diverse The Meaning Of Life, to the worldbuilding and nervous breakdown of Rejected. They are laced with rich slapstick and the darkest of black humour. It's interesting to note that nowadays, Hertzfeldt "never starts with a finished script", in that the act of creation will guide him to the finish line. He also feels the biggest enemy to creativity is time, lamenting the Hollywood system of projecting a release date for a film before anyone's started shooting.

In an effort to at least try to give some worth to my section of the diary, I've spent a couple of days getting to grips with a rather decent digital camera. (A quick shout out to pajh and Jehane, you're awesome!) Asked Laurence Gough, director of Salvage, for a quick snap outside the Filmhouse, but it's not quite good enough to use, alas - or at least until I can figure out the Photoshop incantations. When the Eye For Film team get together for post-Festival drinks I'm going to have to corner our resident photographers for a half-hour lesson.

It's nice to attend a social bash for an EIFF World Premiere that isn't the usual dreary parochial rubbish (Stone of Destiny, The Flying Scotsman). Crying With Laughter is a rather intriguing Scottish black comedy, mixing the psychological bravado shield of stand-up comedy with the dark germ of Korean masterpiece Oldboy's wronged antagonist. Stephen McCole, in a major leading role, grabs onto it and wrestles it for dear life - a wonderful star-making turn. Turning up as the most underdressed man in the room - bright green t-shirt, leather jacket and worn jeans from a billion bike-rides, and the tools of my trade - notebook and the aforementioned SLR.

Since I am no intrepid reporter there to sniff out a story, I ended up simply practicing more with the camera, quaffing the free booze and hanging out with Lucas Roche and the writer/star of Big Things, Tony Claassen - who is in no way as big a twat as his cinematic counterpart. Lucas is a bit of a technical wizard, one of the editors of Dead Man's Shoes (EIFF 2004), and the digital colorist of Big Things. An interesting guy, technically minded and with loads to talk about, such as the current structure and ownership of Hammer Films - and who shares my affinity for doing the half-recognised glance/"who was that guy?" interior monologue routine with everyone you meet at a film festival. There's nothing quotable in our chit-chat, but it's good to know there are people in the industry who really give a damn and are just as lost as I am.

We were treated to three sets of stand-up comedy from practising Edinburgh comics: Parrot, Gary Dobson and the star of the film Stephen McCole - aka Joey Frisk, who started off with the zinger "Ever felt like you're being watched?". Everyone was awesome, the room was receptive and the comedians turned the air brilliant Navy blue. McCole's delivery of The Best Blow-Job In History was magnificent, showing every bit of the startlingly good timing he demonstrated in the film. Stand-up comedy has a a particularly fearsome and awesome responsibility to entertain - an exorcism of sorts. I'd like to know what makes stand-up comics tick. Ditto, Don Hertzfeldt!

Anyway, to bed! Up early again for The Missing Person - early buzz for this modern film noir is positive.

The Beach House Beyond Driven Buñuel In The Labyrinth Of The Turtles Chevalier Cinema Paradiso Dheepan Eating Up Easter Litigante Lynn + Lucy A Prophet Radioactive Rust And Bone The Tobacconist Volcano Weathering With You A White, White Day

Arthur & Merlin: Knights Of Camelot The Tobacconist It Couldn't Happen Here Relic Brigitte The Beach House We Are Little Zombies Capital In The Twenty-First Century Isle Of Us Last And First Men Breadline Radioactive Galena The Booksellers Beyond Driven Eurovision Song Contest: The Story Of Fire Saga Eating Up Easter I Wake Up Screaming The Viewing Booth Alive