Edinburgh Diary, Days Zero and One 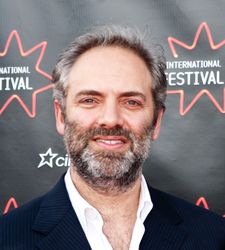 Sam Mendes - director of the Opening Night Film, Away From Her (photo by Max Blinkhorn)

The weather in Edinburgh is never very reliable. Although it's almost midsummer, a storm sweeping across the country battered the Scottish capital with rain and wind throughout Tuesday and Wednesday, but that didn't stop filmmakers from flooding in to present their work and talk to the assembled press. After all, this event, the 63rd of its kind, is Britain's biggest celebration of cinema, and it leads the world with its focus on independent film. Edinburgh is the place to go if you want to see something a bit out of the ordinary.

We've started indexing these days a little differently: The Edinburgh International Film Festival press screenings start one day before the festival begins. Concordantly, Day One is the second day of reviews. So, we're going to call the first day of reviews Day Zero, and see how it goes.

So, Day Zero - for our reviewers, that meant starting before the event opened up to the public, getting out of bed early on that grim Tuesday morning to be in the cinema by nine. But from what they had to say about the films they saw, it was well worth it. White Lightnin', in particular, received praise for its dynamic storyline and powerful central performance, with Andrew unable to stop enthusing about it. Part biography, part fiction, it's the story of an Appalachian folk dancer with a penchant for inhaling dubious substances and a lax attitude to the law.

Stuart was less impressed by experimental movie Shirin, coming up for a nationwide release next week, which he said was an interesting idea but felt like sitting watching somebody else watch something more interesting. He had lots of praise for Wasted, although it's pretty grim, looking at the lives of drug addicts, and he says it features a stomping soundtrack by up and coming band El Dog. Chris admired the beautiful cinematography in Birdwatchers and Pomegranates And Myrrh, and enjoyed Big River Man - as regular readers will know, he's a big fan of South American cinema, though he says the closest he's personally come to swimming in the Amazon has been falling in! Scott kindof enjoyed Tony - describing the lead actor as "excellent", but the storytelling was weaker than it should have been.

Outside the cinemas things were getting busy, too. Stuart bumped into the guys from Running In Traffic, tipped to be one of this year's big hits, who were excited about the praise their film has been receiving. They recounted a story from Cannes, where a taxi driver had asked if they'd seen it. "Yes," one of them had answered. "I'm the composer."

Edinburgh is a great place to spot new talent and it's always remarkable how many filmmakers one finds there being shy about their work, often unaware that they're at the start of brilliant careers. Unfortunately the gig talent didn't show on the night, with Maggie Gyllenhaal cancelling her appearance at the last minute, but the red carpet was still full of famous faces. Representing the opening film Away We Go (in which Gyllenhaal stars) were actor John Kasinski and director Sam Mendes, the latter a little camera shy but putting on a brave face. Everyone was cheered by the last minute appearance put in by the sun, which had been hiding all that day, enabling the stars to stay dry while we got some great photos.