It's not just the films in New York that are capable of offering surprises. The weather also has a 'boo' factor and on Saturday Mother Nature decided to dispense with the cloud and bypass spring altogether, as summer arrived in a blast of sunshine.

The hot temperatures outside were mirrored by the boiling anger contained in Kirby Dick's latest, documentary Outrage, which 'outs' gay politicians who consistently vote against gay rights legislation. Outing is a very controversial subject but the case is well argued that this is not about hounding all closeted gay politicians out into the light of day, but rather concerned with exposing those who are acting hypocritically in terms of their voting record. There is no doubt that it can be argued to be in the public interest - just as exposing a MP who espoused family values while conducting and affair would be - but there are still problems with the film. There is no right of reply for those politicians in the cross-hairs - particularly Florida state governor Crist and a segment attacking Mary Cheney, the lesbian daughter of former US vice president Dick, only serves to weaken the documentary's argument, since she is not a politician herself there can be limited public interest in having a go at her for not lobbying daddy more. His attacks on the media, for being complicit in cover up, too, are largely toothless.

Still, much of what the film contains is incendiary and interesting stuff which, at the very least, should serve to prompt a good debate on the issue. There was certainly plenty of chat at the roundtable with Kirby Dick afterwards, which you can read about here. When asked about the right of reply issue he said he feels the likes of Crist already have a suitably high profile and platform to say what they think about the film if they like - which still feels like something of a cop-out to me.

Later in the afternoon, I headed back to the cinema for a screening of My Last Five Girlfriends, which barely had a spare seat in the house. Director Julian Kemp introduced the film, saying it was a "massive thrill" to be showing the film at Tribeca. Turns out both Kemp and his lead actor Brendan Patricks are magicians in their spare time. Patricks was also there, along with two of the girlfriends - Edith Bukovics and Cécile Cassel. Kemp added: "It's supposed to be a comedy and we'll find out in 90 minutes if it really is."

Turns out the news is good, it is genuinely funny and has an admirably gentle Britishness. A British cousin of sorts to Sundance romcom 500 Days Of Summer, it sees Duncan (Patricks) on the verge of suicide, recall his previous five relationships. Each of the journeys is framed as a ride within an imaginary theme park dedicated to his life. Kemp makes this central conceit work well, neatly carving the film up into segments and his quick-fire scenes, snappy dialogue and imaginative interpretation of Duncan's thoughts and memories make for an entertaining trip. Unlike 500 Days Of Summer, which occasionally seemed to be serving its director rather than the audience, Kemp never lets his invention get in the way of the ongoing narrative.

After the screening - which was very well received - Kemp and Patricks took questions. Asked how he came up with the concept, Kemp said: "Oooh, that's a big one. It's kind of based on Alain De Boton's book On Love (Essays In Love) and that's a series of essays about the nature of the romantic struggle. But it doesn't really have a story and it only has one girl, so it was a great starting point for the themes, the ideas and some of the scenes and then Alain's book uses lots of very clever literally devices and I though that we could do a filmic equivalent, with perhaps a few pop culture references. That was the starting point... and 28 drafts and seven years later, that's what you got."

Kemp went on to say that he had to edit the film out of "necessity", adding: "There were an awful lot of scenes, around 280 - normally, you're supposed to have about 70. And we shot it over quite an extended period of around 18 months, so it was this enormous jigsaw that we had to try to find a continuity through, so it was more convenient for me to edit as it went along.

Patricks added: "From an acting point of view it was also quite useful. Because Julian was editing on the fly, sometimes we'd film four scenes in a day and a year later we'd film the next four scenes, so for me it was very useful because Julian would have it on the computer edited already and we'd just have a quick look at that and that would help."

Patricks goes on to reveal that a segment involving stop-motion of Duncan in bed for three days involved some serious time in the sack for the actor.

He said: "Julian persuaded me to spend 24 hours in a bedroom on my own, with strict instructions that it was three minutes per frame - so I had a little time to pop to the toilet or whatever. And Julian prepped this as the greatest acting experience ever - 'you can get really into the part' - and I packed myself loads of beers and I had a complete series of Battlestar Galactica, my favourite show, and it was going to be the greatest experience of my life. Ten hours into it, I hated Battlestar Galactica, hated myself, hated the room, hated the world. And Julian didn't even pick me up at the end of that... so thanks for that." 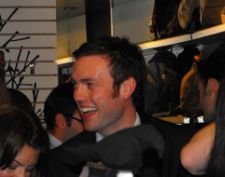 It's at this point that Kemp thanked his producer Marion Pilowsky... not least because she was the one who picked Patricks (pictured right) up after his solitary confinement.

"I wasn't in the best mood," Patricks, adds drily.

Kemps also reveals that the biggest influence on the film was Orson Welles last movie F For Fake, which was "all about conjuring and playing tricks".

Patricks was then asked how he and Kemp came to get together for the film, adding that he is like "the hot new Hugh Grant" - although, I'd personally say he is most like Jude Law, both in looks and style. Turns out they met at a party, and later met in a London dive for a pint to go through the film.

Most hilarious, though, was the final question, which began: "We missed the beginning of the film..."

In a sweet move mirroring the film's tone, they went on to invite everyone in the audience back for an 'after party'... in a Crumpler bag store. Sandwiched between a row of, admittedly, rather nice bags and the cash register, while chomping a lamb pie and swigging a Heineken, it occurred to me that there was something quintessentially British about the oddball choice of venue. And the day had one surprise left - a draw to win some bags. In the interests of full disclosure, I've got to tell you that I am now the proud owner of a "Person Of High Net Worth" bag.

Sunday marked my first visit to the screening room, where I managed to catch Newsmakers - a Russian remake of Johnnie To's Breaking News. I haven't seen the original, but the premise, of the police creating a reality show to catch a group of gangsters after they themselves are caught on camera in a botched take-down, transports well to Moscow. Featuring the sort of gritty violence of the likes of films such as Get Carter, rather than the more balletic stylings of To, it is a gripping ride. Importantly, it never loses sight of either characterisation or humour.

The subject of Jose Padhila's latest film, Garapa, however, is absolutely no laughing matter, as it deals with the plight of the hungry and malnourished in Brazil. Attending a roundtable with him, its clear that, as with Elite Squad, it is a political issue that is close to his heart. He says that he wanted to make a film and "have the audience sit down and have a sense of things lacking from it, in the same way that there are lot of things lacking from the lives of the families. So black and white is one of the things, I used fixed lenses, so you don't zoom in (every documentary nowadays has a lot of zooms. There's no music, the sound comes from the centre, so it's like a mono film, only straight cuts, so you don't have dissolves."

He went on to talk about how he picked the film's subjects and what has happened since the film was shot. More of which, later.

I'll leave you with my, "think you've seen it all in New York... think again" moment of the day, which is this rather fantastic fishmongers van - meat without feet, anyone?