Eye For Film >> Features >> Cinema for everyone 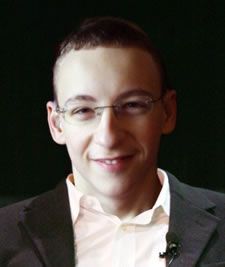 Everybody loves an evening out at the cinema, but for some people it's more difficult than for most. If you have a hearing impairment, finding subtitled films can be tricky; if you have a visual impairment, it's even harder to find ones that are audio-described. Last week, 17-year-old Dean Rhodes-Brandon won the Make Your Mark Enterprising Young Brits People's Choice Award for his innovative website, Your Local Cinema, which aims to make access easier. We asked him how it all works.

"Every week we send out an e-newsletter, to more than 60,000 addresses, containing the latest subtitled and described films, locations & showtimes. There are around 500 subtitled shows nationwide every week, and thousands more audio described shows in more than 300 cinemas."

With all these screenings going on, access doesn't sound so difficult - but finding them can be tricky. Dean explains that his call centre deals with hundreds of enquiries per week. He is also involved in working toward future improvements.

"We are advocates for the public, and deal with the representatives of the cinema/film business on their behalf. We are members of the film industry's 'Disability Working Group', a collection of representatives from cinema, distribution and technology companies, as well as representatives from the main charities for people with hearing or sight problems. This group meets regularly to review and plan the future of 'accessible' cinema."

So how did people get by before this service existed? It was pretty difficult, says Dean.

"In the year 2000, before our website/information service came along, there was no English-language subtitled cinema. Or audio described cinema. The only way deaf people could enjoy cinema was to watch a foreign-language film. Ridiculous! TV had subtitles, via teletext. Video tapes had subtitles (accessed via an inexpensive add-on box). DVD discs had subtitles, accessed via the remote control. But cinemas did not, even though cinema is at the start of the movie 'chain'.

"We started our service in 2000, with the aim of persuading the cinema industry to become accessible to people with hearing problems, and somehow provide subtitles. Coincidently that was also the year that DTS, a US company known for its cinema surround sound technology, introduced its 'Cinema Subtitling System' - a solution for cinemas to project on-screen subtitles on foreign language films, to reduce the cost of producing subtitled film prints. It could of course also be used to project English language subtitles. It also had an 'audio description' feature, which enabled people with sight problems to enjoy films. (A narrated soundtrack plays through wireless headphones - only the user can hear it). Audio description has now appeared on TV and on many DVD releases but back in 2000 it was quite a new feature.

"So it appeared that the perfect solution was out there. We just needed to ensure that the UK cinema industry heard about it, liked it, bought it, installed it and used it!"

The campaign started with a petition.

"We trialed it in a local school, with a dozen deaf students. The petition got over a thousand names from that school alone. So we launched a website to publicise the petition nationally and over the next year or so we got many, many thousands of names. We also bombarded the UK film industry with information on the DTS system, in the hope that they would take an interest in it. We don't know for sure if that helped, or if they were actually interested in it anyway, but eventually they decided to trial the system in a handful of cinemas."

This humble beginning was at least something, but Dean had bigger ambitions.

"We wanted the system in every major town at least. So we took the petition to the UK Film Council, who spend millions of pounds annually on film-related projects, and persuaded them to seriously investigate the DTS system, and accessible cinema in general. They hired the BFI to look into the matter, held focus groups, meetings, worked out costs and eventually produced a report which recommended that around a hundred cinemas - around a fifth of the UK total - should purchase and install the DTS system. They also recommended that our website and information service - which by now had become 'the' place for all things 'accessible cinema' related - be supported and funded by the film industry.

"So in 2004, after more than three years of campaigning for better access, but not just moaning - actually working with the film industry - we were hired by the industry to be the 'marketing arm' of cinema access. It's our job to round up people and get them into subtitled shows."

All this a huge achievement for someone who, back in 2000, was just eight years old. How did Dean get involved - and how did he get the idea in the first place?

"Back in 2000 my parents happened to notice, publicised in a local paper, a subtitled screening of the Aardman animation Chicken Run at the Ritzy cinema in Brixton, London. This was the first English language film to be subtitled in a UK cinema, produced as a trial by the cinema industry, to see if there was any interest in such a screening. So we went along, were the only people there, and it was... amazing. As a deaf person, I could finally enjoy the cinema experience. So after the film I asked my mum and dad why there weren't more films with subtitles at cinemas? Good question, we all thought, let's look into it.

"So we looked into it, came across the DTS system mentioned above on an American film cinema news website, realised that there could be lots of subtitled shows and thought maybe they could be well attended, if people were aware of the screenings. We set up a website and email discussion board, and started investigating."

It doesn't stop there. Dean is full of ideas for improving the service in the future.

"This year we will be upgrading the website to include more subtitled trailers and clips, delivered more smoothly, via flash technology, rather than our current quicktime standard, as well as including many more audio described clips. We don't have enough at the moment. We will also be adding better search features.

"But the website is just a part of our service. We have been talking to industry contacts about providing accessible versions of official movie websites. Mini-sites that contain subtitled and audio described trailers, complete subtitled and described UK listings, text accessible to blind people, voiceovers etc. We are also looking into making audio described soundtracks as common as audio books, available on iTunes etc.

"But our biggest challenge and goal is to invent subtitle spectacles'! Like 3-D specs - lightweight, throwaway, but rather than provide a 3-D effect, they provide subtitles, on the specs, which only the wearer can see. The subtitles are on the cinema screen, but so faint that they can't be seen. Only wearers of special 'polarised' spectacles can see them. Something like this would enable a person with hearing problems to attend a choice of many more subtitled shows. A film can screen four or five times a day in say, screen number one, of a cinema. It would be unacceptable to have many of those shows subtitled - most people simply don't like subtitles, that's a fact. So most cinemas only show one or two subtitled shows a week. 'Subtitle spectacles' would mean that all shows, all day, all week could be subtitled."

Cinema is a big part of Dean's life, and his enthusiasm comes through clearly.

"I just love watching films, always have. But of course, being deaf, I need subtitles. I grew up with them, they were always on TV, video and DVD, so I don't remember when I first watched them. But I definitely do remember my first subtitled cinema film - Chicken Run. I guess it changed my life. It gave me a job (part-time, I'm still at College). And receiving feedback from other people with hearing or sight problems is the best thing of all."

So what are his favourite films? He says that's a difficult question, but plumps for Pulp Fiction.

"It's a masterpiece. I guess I'm at that age when Gangsters are 'cool'. Of course they're horrible people really, but they make a great subject for a movie!"

And finally, how did he feel about receiving his award from Chancellor Alistair Darling?

"I feel really happy. I've been doing this for years and it's nice for my work to be recognised. I'd like to say thank you to all of the people who voted for me. They're the real reason why I decided to try and do something about it all those years ago."

Check out Your Local Cinema for yourself - http://www.yourlocalcinema.com

Getting the bug Carter Cruise on queering horror in Swallowed