Days One and Two of the Glasgow Film Festival: In The Loop, Anvil and The Dungeon Moor Killings. 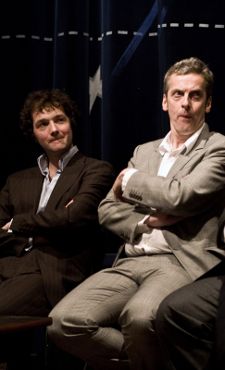 Getting ready for a film festival is always hard work, and with the GFF getting bigger all the time, this year's was tougher than ever. Though Eye For Film have been there from the beginning, this is the first time the GFF has run proper press accreditation, which meant that it was theoretically simpler to get things organised but, since a lot of things happened at the last minute, more complicated in practice. Nevertheless, by Tuesday, when I attended a preview of the spectacularly invective-filled In The Loop ("One of our ruder films," said organiser Allison Gardner), I had managed to secure access to a further 12 films for myself, and had picked up several screeners.

That night I watched the excellent Aussie exploitation film history Not Quite Hollywood, reminiscent of Jackass but with a point, and stayed up late sorting out Andrew Robertson's festival schedule. Wednesday was a further day of organisation, and then on Thursday the action began in earnest. Unfortunately, so did the snow. It's pretty difficult for me to walk in that kind of weather, given my disability, so I had to set out early just in case, and I actually ended up reaching my destination pretty early, too. This was a hotel where a group of PRs waited with welcome cups of tea, croissants and butter biscuits. Once upon a time, routine press screenings used to be like this. The bribes have been phased out since, but we writers do appreciate them when they appear.

Having eaten, I was ushered into a meeting room along with a couple of student writers, a young woman from The Skinny, and an older journalist who chose not to identify himself - a man of mystery in the sort of battered brown leather jacket some people in the profession treat as a uniform. We were shortly thereafter joined by Armando Iannucci, Peter Capaldi and Chris Addison, there to promote In The Loop. The former two are native Glaswegians and were excited to be premièring the film in their native city. "I get to see my mother and my sister," Capaldi remarked. "For free!"

Both reminisced cheerfully about the GFT. "I remember when it used to called the Cosmo," said Capaldi, "And I can remember seeing Dumbo there. I don't mean the elephant, I mean the film."

"I love the GFT. I went to school at St Aloysius, just round the corner," said Iannucci. "The GFT would show things like seasons of Shakespearean films and my English class would go there. I remember sneaking out of a maths class because Felicity Kendall was in a one-to-one interview. There were five of us. We got out of maths saying it was for English, but really we just wanted to sit in the front row and stare at Felicity Kendall."

We'll bring you more from this interview at a later date. In the meantime, our intrepid photographer, Stuart Crawford, was getting ready for the evening's opening gala and the red carpet that would proceed it. The GFT was swathed in bright lights and fans gathered eagerly outside, undeterred by the cold air, as a succession of long black cars drew up. The In The Loop team all put in an appearance there, as did GFF regular Sean Biggerstaff, Danielle Nardini, and a host of other celebrities. Muriel Gray turned up in a sports jacket - "I didn't have time to don a frock" - and pulled a face at the photographers.

As the Opening Gala film, In The Loop went down a storm, and afterwards there was a very crowded party for the audience and assorted guests, where the free Auchentoshan whisky provided by the festival's most popular sponsor went down well. The celebrations went on far into the night.

The following day, the GFT's Cosmo Café was crowded with people by noon, and had already run out of scones. "Apparently there's some sort of film festival," an elderly lady explained to her companion. Young helpers were scurrying around everywhere providing information and enjoying their free cups of tea. I was simply glad of the chance to sit down for a while, having dragged myself there through another wintry day, a strange journey on which I had seen several cuddly Santas jump from a high window in front of shocked pedestrians. I guess the credit crunch must be biting at the North Pole, too.

One group of people who seem to be doing well despite it are the heavy metal band Anvil, stars of Anvil! The Story of Anvil, whom I met in a nearby hotel. They're very excited about how the success of Sacha Gervasi's documentary has revived their career. We drank cups of tea together - they had to order extra sugar, which they consumed at an astonishing rate - and we chatted for a while about their experiences in making it, as well as their hopes for the future and their fondness for the films of Marty DiBergi. Afterwards, singer Lips told me that I look exactly like his 11th grade biology teacher. I wasn't quite sure how to take that. "Not in a bad way," he said.

Later that afternoon the band had to get ready for the gig they would play alongside the film screening in Cineworld that evening - "It's the Anvil Experience," explained drummer Robb Reiner - so I set off to go over some photos with Stuart. Later I headed back to the GFT to catch a screening of low budget horror film The Dungeon Moor Killings, in which a group of young people hoping to film big cats in a Scottish wilderness fall prey to the evil schemes of a mad scientist. Director Jim Hickey, writer Jonathan Hickey and producer Ross Crombie joined us afterwards to talk about their work.

"We're glad to be featured on Eye For Film," said Jim. "We want to use the internet to get people to notice our film... We think it's very exciting that there are now an increasing number of ways to get a film made without going down the traditional route. This could be the moment when a whole lot of new ideas happen and lots of different sorts of film start to appear."

"Tickets are selling really fast and, as of today, we're already nearing the total sales from last year," said festival director Allan Hunter. "The Audrey Hepburn retrospective is doing particularly well." So it looks as if this is going to be another fantastic year at the GFF. Why not come along and be a part of it?