Eye For Film >> Features >> Classic films get a new look

Classic films get a new look

Chris Panzner talks about the new style of animation set to change the way we look at old films. 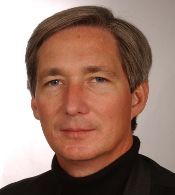 Chris Panzner is at the head of a new movement in animation which could see some of our favourite films return to the screen in a new form. We caught up with him and asked if he could tell us a little about his work.

Chris Panzner: Re:Naissance can be succinctly defined as "the re-creation of live-action films in animation". It's a new spin on adaptation and the remake. For the first time ever in the 100-year history of animation, Re:Naissance is going to invert the adaptation process by taking existing live-action films and faithfully reproducing them in animation, in a totally original graphic style unique to each film. We use a process known as "rotomation," which is a combination of rotoscopy and traditional animation. Our goal is not merely to rotoscope the original film - we are creating an entirely new film while remaining faithful to the original; an homage to the source film. The end result is an original animated feature film, meaning the stars in the live-action film will be caricaturized in some form but the movements and expressions (and original dialogue) will remain true to the original actors, although the animated characters will be completely new original graphic representations.

Conceptually, we approach each project as an "illustrated film" or a "living comic."

Jennie Kermode: How does your technique differ from other forms of animation used with live action film, like the rotoscoping we've seen in movies such as A Scanner Darkly?

CP: The rotoscope, as a tool, has been used for a variety of effects and to achieve a number of goals: "tracing" film and video images for a realistic look for human and animal characters (see the Fleischer brothers' Gulliver's Travels (1939) - they were the inventors of rotoscopy); to combine live-action and animation (famously, in Anchors Aweigh (1945) where Gene Kelly dances with MGM/Hanna-Barbera's Jerry mouse); and for special effects.

The technique has always been employed exclusively on original film and video sources, however, and never on existing films… until now.

Re:Naissance, however, uses rotoscopy only to do key frames and then in-betweens traditionally, using proprietary designs and backgrounds, new voices, new music, new FX, etc. The designs will correspond to the characters in the film but do not have to be exact reproductions of the film images. Practically speaking, the original film is the storyboard and the live action movements the source of inspiration for the animation, but we're also going to have some fun: change the blocking, action, camera positions, perspective, add sound/visual effects, stretch out/shorten scenes, insert scenes if need be and, well… anything and everything (except the story and dialogue.) The tools for this are proprietary software and a video-based electronic drawing tablet.

And while the first films we're doing will be in 2D, the software is adaptable to a CGI environment and our intention is to also produce 3D features a little further up the road.

JK: What sort of films are you hoping to adapt using this technique? Can you tell us about what you currently have in the works?

CP: For our very first Re:Naissance film, we're doing George Romero’s Night Of The Living Dead (1968). You can see some preliminary and inspirational artwork on our website. The Re:Naissance core market is the 15-34 year old graphic novel reader, definitely not the Disney/Pixar demographic. We want to tackle adult themes (sex, violence, etc.) with sophisticated artistic choices. Our ambition, in fact, is to create an alternative to Marvel and Manga. I can't say a whole lot about the other films we have in development at the moment, but I can assure you our choices will surprise and delight.

And, while the primary objective is to adapt motion pictures, television shows, series, documentaries, newsreels, archival materials, etc. are just as easily adapted.

JK: Are you hoping that this technique will help to preserve films that are decaying in their original form? Do you think it can make them more accessible to a modern audience?

Since we are doing exclusively famous films, all of which have been remastered for preservation and redistribution, our ambitions are more artistic than technical. We're sure to have critics and fans, but critics are likely to be an older audience who might object to anyone tampering with their favorite or classic film. Our approach, as I said, will be to create an homage to the source film, with designs and animation faithful to and in the spirit of the original. Supporters and, hopefully, fans are likely to be a younger generation, either slightly familiar with the live-action original or completely unfamiliar with it. They will discover what, for them, is a completely new and original film. (And, in contrast to those films in black and white--which they've probably ignored--they're more likely to watch if it's in color and animated.) Our goal, really, is for an older generation to rediscover an old favorite and to embrace its new form, and for a younger audience to discover a new animated film, which may potentially have them wanting to see the older original version.

We're also betting that after people see the first film(s), they're likely to anticipate and enjoy the Re:Naissance films that follow.

JK: Are you choosing animation styles for films based on their original styles, or are you trying to bring out something new in them? How important is it to you that they each have a unique look?

CP: We want to be faithful to the spirit of the original films, but the basis for our artistic choices is completely unrelated to the style of the original. On "NOTLD," for example, we took our inspiration essentially from pre-Code (1940s-50s) EC Comics, although it's a mixed bag. It is also extremely important to us that not only each Re:Naissance film be completely different stylistically from one to the next (modern, retro, stylized, caricature, cartoon, underground, auteur, etc.) but that the genre of film we do also be different each time (drama, crime, science fiction, fantasy, horror, romance, musical, western, etc.)

Through the marriage of cult live-action classics and exquisite graphic design, our goal is to create a whole new brand of animated film.

JK: How did you personally become involved in all this? What's your background?

CP:I come out of television but I've been doing mostly television/feature animation for the last 15 years or so, exclusively in Europe. I came up with Re:Naissance in order to combine my passion for art and my passion for film. I can draw, only I'm not an animator; I lean more towards the illustration/design side. The genesis for Re:Naissance is the result of my experience with colorization in the States, animation in Europe and my ever-increasing passion for the Franco-Belgian graphic novel.

Although even I hated the result of colorization, it was technically a very interesting process. We also changed copyright law in the United States, so that any significant artistic enhancement of an existing work resulted in a new copyright. There's a lot of time between the two events but, for the anecdote, I saw a postcard a few years ago that an illustrator had done of a scene from a famous French movie and I loved it. I held onto it for a while, not knowing exactly what it was about it that interested me so much. In the meantime, I had started working in feature animation, the absolute first film I worked on being The Triplets Of Belleville, which was nominated for two Oscars. The style was typically French graphic novel ("bande déssinée") and its success in the US got me thinking about how Manga was introduced in the Eighties, how huge it became and the spate of graphic novel adaptations--mostly English and American, although it's a Franco-Belgian invention--to the big screen in Hollywood.

The real turning point, however, was when I saw a still from Sin City with Bruce Willis side-by-side with the corresponding panel from the graphic novel. It suddenly occurred to me that the reverse had never been done: to take an existing film and do an animated version. Comics to animation to live-action film/series to animated film/series to comics and back again had been done over and over and over. Which is when I asked myself "Why is it okay to do a live-action adaptation of a graphic novel but not a graphic novel adaptation of a live-action film... that moves?" And the paradigm shifted.

JK: Do you think that advances in the technology you're working with will lead to further exciting developments in the future?

CP: Re:naissance is an entirely new industry with an extremely large existing market; an industry that Re:naissance will define not only technically but creatively, financially and commercially. Through the marriage of film and design, it will create a whole new brand of animated film. From classic black-and-white and color films to television shows and series, reborn visually from a vast array of graphic styles, the result will be high-quality animation that not only perpetuates the source franchise but creates an entirely new one. The variety of genres and graphic treatments, for both 2D and CGI, means the concept will remain evergreen. A conservative estimate of the candidates for animation remakes would be in the hundreds, if not thousands, of films. These famous and classic films have big name stars, marquee recognition and a huge built-in international audience.

The best definition of animation is "anything can become something else." That about sums it up. Your imagination is the limit.

To learn more about Re:naissance, check out their blog at www.licensetoillustrate.blogspot.com.

Antrum A Call To Spy Chop Chop Cinema Paradiso The Climb The Ladykillers Max Winslow And The House Of Secrets The Mothman Legacy Nomad: In The Footsteps Of Bruce Chatwin A Pandemic: Away From The Motherland Rebecca Tailgate Tar

Stay-At-Home Seven: October 26 to 31 Telly and streaming suggestions for the coming week

Jeff Bridges diagnosed with lymphoma "As the Dude would say.. New S**T has come to light"

Win Two By Two Overboard! merchandise in our latest competition.