The accomplished actor/director talks about The Premonition at the French Film Festival. 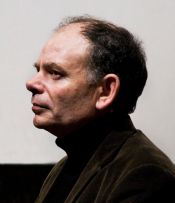 One of the highlights of this year's French Film Festival was a screening of Jean Pierre Darrousin's The Premonition. Afterwards the actor/director dropped by to talk to the audience, along with co-writer Valérie Stroh. Darroussin has been working as an actor since 1979, so he was asked why it had taken him so long to direct his own film.

Jean Pierre Darroussin: I have wanted to make a film for many years, but I was too shy. It's that simple! Now I find it hard to talk about this film because it's the sort of work which you need to think about. You should watch it and, hopefully, take something away with you.

Having decided to take the plunge, why did he choose to make a film based on a novel, and why this novel, Emmanuel Bove's Le Pressentiment?

JPD: I'm not always very enterprising, but this was one of those situations where everything falls into place. When I discovered Emmanuel Bove I found that I could really identify with his characters, who, like me, are often at odds with the society in which they live. I felt that this was the right story for me to tell.

So, given that it was such a personal project, why did he choose to work on the script with someone else? Valérie stepped in to respond.

Valérie Stroh: Jean Pierre asked me to read the novel and I accepted the challenge. He had been flirting with me and I was the closest person in a position to understand what he wanted to do. I wasn't sure that I could bring anything unique to it but I thought our mixture of styles suited it.

An audience member comments that he was particularly impressed by the film's treatment of problems caused by a brain tumour. He wonders if either of the writers had any personal experience of that.

VS: Yes, I lost an uncle to a brain tumour a few years ago, so it was quite personal for me.

JPD: In the novel that character suffers from a lung disease, which was fairly common and much more dangerous in the Seventies, but now modern medicine has changed that, so we updated the story to reflect the fact that, sadly, many more people have to deal with serious brain tumours these days.

Why did he choose to update the story and set it in the present day when it was originally set in the Thirties?

JPD: There were two main reasons. Firstly, when I read the book, I felt that it was a very modern story, just as relevant today. I thought that setting it in the present day would make it easier for audiences to identify with. Secondly, it was my first feature film, and in that situation it's much cheaper to shoot in the present day, especially because I wanted to shoot the streets of Paris. When you adapt a novel you have to tell your own version of it, your own story. Paris as seen in the film, and the districts where the story is set, are not the same as in the novel. It's our own personal vision of Paris.

In adapting a famous work it must always be difficult to decide how much to expand it and develop one's own ideas. I ask Jean Pierre how this affected the way he developed the characters, especially the film's large supporting cast.

JPD: Many of the minor characters are our own, not the same as those in the novel. Because in the novel they tend to be described in passing, we had to develop them rather differently. It's not a question of reconstituting the book, it's a question of recreating the atmosphere and the spirit of it. I wanted to develop a storyline which developed different aspects of characters.

VS: I think they all came across as quite sympathetic despite their flaws, except perhaps the one I played!

JPD: I have always been attracted to characters who don't quite fit in. The hero of this novel has cast away the trappings of his former life so that he can try to shed his bourgeois values. Near the end, in the café when he wakes from his dream, he sees these people and the way they interact with one another - he sees their warmth - and he realises that he'll never be able to be a part of that, but at the same time he has taken a step towards it and he accepts that he will never quite fit in. He's trying to find sense and meaning in the world... Perhaps the two most sympathetic minor characters in the film are the two black women.

VS: That was a deliberate decision on our part.

How does the symbolism of the statue which appears at the beginning and end of the film tie into this?

JPD: It's important because of the way it brings the film full circle, but it's also one of those mysterious elements which gives the film its atmosphere... It's not just about telling a story, it's hopefully about getting people to ask questions and to think. I don't want the audience to go away thinking that the hero's behaviour is all explained by his premonition. Though he does have a dark side, he's basically somebody who knows that the world is not Utopia - he's not fooled - but he's decided to go out there and live his Utopia anyway.