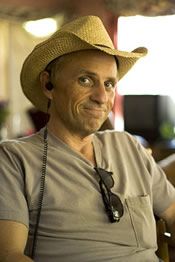 Bobcat Goldthwait has never shied away from the shocking. Best remembered on this side of the Atlantic for his turn as the squeaky voiced Zed, a street punk turned copper in the Police Academy movies, he became known as something of a loose cannon in the States after an incident on the Tonight Show when he set light to the sofa during a Jay Leno interview.

Bobcat insists he doesn't intend to put the cat among the pigeons, and that despite the fact his film touches on crystal meth smoking, bestiality and abortion, he "tried to do wholesome versions of these things".

He adds: "When I write this crap, I actually think that it's not shocking - honest to God. I have no idea when I write the script what people are going to make of it."

They say in the film industry you should never work with children or animals, but it seems Bobcat didn't have a problem with directing the dogs, although the idea of 'pimping' them to Melinda clearly went against the grain.

"It was funny. I let Melinda pick the dog she was going to be performing the act with in that scene, just because I didn't feel comfortable. I wanted there to be some chemistry," he says, laughing.

"We just had the 8 by 10 [pictures] of the dogs laying out on the table and were letting her pick, then Sarah de Sa Rego, one of the producers said, 'You know we need to see the dogs' penises, we don't need to see their faces.' And one of the crew guys - we hadn't started the movie and he was a young boy who had driven down from San Francisco to work on the movie and didn't know anything about it - he was like, 'What is this movie about?'.

That's a pretty good question, but Bobcat insists that, far from being about the salacious episode from Amy's youth, the story concerns something far more universal.

"To me the movie is about a woman being happy, it's not about a woman trying to recover from her past. She's really not too concerned about that. I think she is sabotaging herself from being happy. I think if she hadn't had this thing in her past, she would have used something else to mess up their life. I think people put things in the way to prevent them from being happy. It is unconditional love but that's something I had in mind way, way, deep down but I didn't even realise that until I had made the movie."

The film first saw the light of day at the Sundance Film Festival back in 2006, although at that time it was called Stay. This had to be changed as there was a Marc Forster film of the same name. "Their attorneys were much larger than our attorneys". A year and a half on, Bobcat still seems genuinely surprised at the film's success.

"I'm always surprised when things I make 'click'," he says. "It really did exceed my expectations. I never thought it would be in a film festival or anything like that."

Certainly, festival audiences, both at Sundance and in San Sebastian, Spain, seem to have lapped it up. That may be partially due to its indie feel, with Bobcat using digital video to good effect to give the movie a domestic tone.

"I did want it to look realistic," he says. "Most comedies that come out of America look like sitcoms. They're super bright and it's obviously a set. We had no budget at all, but I wanted to make it look like what it was.

"That was the big experiment for me. To create a movie where people were concerned about the characters instead of a movie that was just joke driven. The jokes... that would have been easy for me to do and it didn't interest me too much - to be a joke movie. I was more interested in making people laugh because they felt uncomfortable."

The recent Tartan DVD release - which also features an entertaining commentary track by the director and an amusing interview with Bobcat and Melinda - is another mark of the film's success, certainly not bad for something that was "written in a weekend and shot in 16 days".

"I have a body of work as a comedian and an actor I'm not all that proud of. Now I'm 45, I truly just work on things I want to. When you first come to Los Angeles, if you're lucky enough to get hired, you buy a house - because you have a business manager, now, who's telling you all this bullshit - and you end up in really bad talking horse movies, going 'what the fuck happened?' And that little voice that was there the whole time, going, 'Hey, this is rubbish, why are you doing this?' But everyone around you is saying, 'Yeah, you should do this'. Now I'm middle-aged I'm just listening to that voice. When I write something, I go 'maybe this is okay, maybe we should make this'.

"I'd like to just keep writing small movies and going out and making them with my friends."

Not everything about his next movie is likely to be small, however, since the latest 'friend' he has attached to the project is Robin Williams.

"Now I have to go out and make sure the movie goes ahead," he adds. Given that part of the financing for Sleeping Dogs came from selling a guitar given to him by Williams, was it just easier for him to appear in his film rather than have Bobcat sell another present?

"Oh yeah," he laughs. "That's why he's doing it, instead of me selling stuff."

But despite the weighty name in the frame, Bobcat insists the new film will still be fiercely independent.

"It's not a big, broad comedy, it's another dark movie. Robin said to me, 'So what's it going to take? About eight weeks?' I said, 'Yeah, if I was doing Lawrence Of Arabia'."

Bobcat thinks the film will take around five weeks to shoot and is aiming to begin in October.

He adds: "In tone it is so much like Sleeping Dogs, another movie that will be perceived as dark but once again I'm trying to explore family relations. It's another movie that's about behaviour but I'm sure people will be shocked and offended once again."

As for the title - "I'm not going to say because I don't want to get in the same jam as I did last time." That's one dark secret he's going to hold on to for a little bit longer.