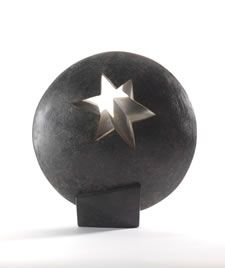 The new accolades are in addition to The Sutherland Trophy and The Times BFI London Film Festival Grierson Award. Two BFI Fellowships will also be awarded at the ceremony on October 28, at London's Inner Temple - which will be hosted by broadcaster, Paul Gambaccini.

Winners will receive the inaugural "Star of London" awards (pictured right) - commissioned especially for the Festival and designed by leading sculptor Almuth Tebbenhoff.

The BFI Fellowship is awarded to individuals in recognition of their outstanding contribution to film or television culture. This year's recipients, the versatile and distinguished British actor John Hurt and renowned Malian filmmaker Souleymane Cisse, will be recognised for their significant achievements in the field of acting and directing. Cisse's Tell Me Who You Are will have its UK premiere at the Festival and Hurt is featured in two LFF titles - 44 Inch Chest and The Limits Of Control.

John Hurt said, "For me, the BFI is the heart of British cinema. I consider it the highest honour possible to be awarded a Fellowship."

The award for Best Film will recognise creative, original, imaginative, intelligent and distinctive filmmaking in the Festival. An initial shortlist has been drawn up by the Artistic Director and the programming team, and will be judged by an international jury, representing the highest calibre of the film community.

Presented for the first time, the Best British Newcomer Award will celebrate new and emerging film talent, and reward the achievements of a new writer, producer or director who has demonstrated real creative flair and imagination with their first feature. This year's judges include Lenny Crooks, Head of the UK Film Council's New Cinema Fund; Christine Langan, Creative Director of BBC Films; Tessa Ross, Controller of Film4 and Drama, Channel 4 and Tanya Seghatchian, Head of the UK Film Council's Development Fund and Executive Producer of the Harry Potter franchise.

The awards shortlists are as follows:

GRIERSON AWARD SHORTLIST
45365
LA Danse - The Paris Opera Ballet
Defamation
Have You Heard From Johannesburg: The Bottom Line
His & Hers
Mugabe And The White African
Osdane
Sergio