Pierfrancesco Diliberto, otherwise known as Pif, opened the Italian Film Festival Scotland with a sell-out show of The Mafia Only Kills in Summer at Glasgow Film Theatre last night (March 6). Today he heads to London to present the film at the Ciné Lumière as part of Cinema Made in Italy. 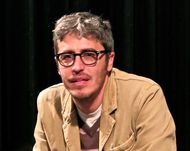 Beauty is scary.. looks are a currency Director Ruben Östlund on the starting point for Triangle Of Sadness