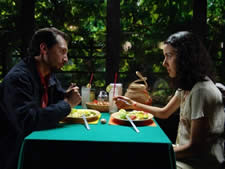 Blue Eyelids is among the films screening

Celebrating the best in Latin American and Spanish film, the 14th Viva Film Festival runs, at the Cornerhouse in Manchester from March 6 to 16, and 20 of the films will also screen at the Irish Film Institute in Dublin from March 20-30 (see www.irishfilm.ie), and will then tour the UK. Click here for a full list of venues and dates.

This year again features a fantastic line up of fiction and documentary films, including Sundance Special Jury Prize winner Blue Eyelids, pictured right. As well as featuring the best new Spanish language films, the programme includes retrospectives, this year including a tribute to director Fernando Fernan Gomez, who died last November, and a retrospective of films produced by Lita Stantic.

There will also be a series of Spanish-themed events, plus guests including Juan Antonio Bayona (The Orphanage) and actors Ines Efron and Martin Piroyanski (XXY)

El Baño Del Papa
A man tries to build a public loo to cash in on a Papal visit.

Timecrimes
When a man accidentally travels back in time, he finds restoring the status quo is easier said than done. Plus read our exclusive interview with director Nacho Vigalondo.

[Rec]
A news crew get trapped in an apartment block with a deadly virus and something else...

Under The Stars
A self-centered trumpeter finds redemption in an unexpected place.

Chaotic Ana
An artist who joins a commune tries to uncover her past lives to end a cycle of violence.

Blue Eyelids
A pair of lonely people come together in offbeat romance.

La Antena
Dystopian fairytale about a 'city without a voice'.

The Cat Pact
Moggy hunting and romance on the rooftops of Barcelona.
A-Z of Viva 2008 reviews >>>

Twisting time
Director Nacho Vigalondo talks exclusively about his mind-bending feature debut Timecrimes... and the upcoming Hollywood remake.
Jaume Balagueró on REC
The Spanish director discusses his horror hit.
Festival frenzy
Travel the world from the comfort of a cinema, thanks to a host of international festivals this month.
Rec revealed
Paco Plaza and Jaume Balaguero talk about their monster Spanish hit.