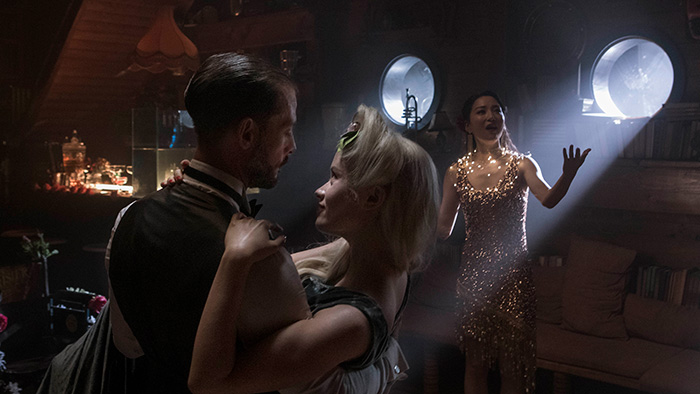 A Mermaid In Paris

This year's Fantasia International Film Festival is taking place online because of Covid-19, but contains the same eclectic mix of fantasy, science fiction, horror, anime and action as ever. Enjoy cutting edge animation, nerve-racking chillers, daring documentaries and the latest experimental works from Japan. Despite the change of format, there are still opportunities for attendees to engage with filmmakers at the festival and socialise with the Fantasia community.

The festival runs from 20 August to 2 September.

Air Doll
A blow-up sex doll develops a sense of self and begins to explore the world around her.

Detention
A high school student falls in love with the teacher who organises a secret book club in contravention of the White Terror martial law.

Anne At 13,000 ft
Even in her job at a children’s day care centre, Anne prefers fun to actual work and often alienates those around her with her erratic behaviour.

The Reckoning
A period thriller set in 1665 during the Great Plague and subsequent witch hunts.

Come True
Plagued by disturbing dreams and unable to go home, a teenager is relieved to find help at a university sleep study, but unwittingly becomes the channel to a horrifying new discovery.

Wildland
After her mother’s death, Ida moves in with her aunt and cousins... whose ethics are dubious.

Jumbo
Jeanne, a shy young woman, works in an amusement park. Fascinated by carousels, she still lives at home with her mother. That’s when Jeanne meets Jumbo, the park’s new flagship attraction...

The Funeral Home
An undertaker's dysfunctional family lives amongst coffins, wreaths and mischievous but nonviolent ghosts - but then a malevolent entity arrives.

Dinner In America
An on-the-lam punk rocker and a young woman he meets by chance embark on an offbeat romance.
A-Z of Fantasia International Film Festival 2020 reviews >>>

Falling from the sky
Kazik Radwanski and Deragh Campbell discuss Anne At 13,000 Ft
A taste for blood
Amelia Moses on Bleed With Me, Bloodthirsty and reimagining the werewolf
I found out I'm a romantic guy at heart
Adam Rehmeier on directorial control, collaboration and music in Dinner In America
On a dark and stormy night
Cody Calahan on storytelling and shooting The Oak Room
The witching hour
Neil Marshall and Charlotte Kirk on The Reckoning
Out of the shadows
Mickey Reece on Climate Of The Hunter and how to get away with putting art first
Dreams of reality
Jason Neulander on perception, reality and breaking the rules in his debut Fugitive Dreams
Cape Town after dark
Ryan Kruger on Fried Barry and the future of South African film
Fragmented memories
Sabrina Mertens and Jan Fabi on capturing something amiss in Time Of Moulting
Bringing the house down
Gabriel Carrer and Reese Eveneshen on directing action and destroying a house in For The Sake Of Vicious
Big cat energy
Bao Tran on ageing, martial arts, film finance and Paper Tigers
The wild side
Daria Woszek on femininity, tradition, menopause and Marygoround
A stroke of fortune
Natasha Kermani on Lucky and working with Brea Grant
Leave that phone alone
Mariel Sharp and Kaye Adelaide on low-budget filmmaking, crystals and Don’t Text Back
Going behind the scenes
Justin McConnell on Clapboard Jungle and what it takes to make a movie
Strides ahead
Elza Kephart on villainy, fast fashion and Slaxx
A phoenix from the ashes
Josie Hess and Isabel Peppard on Morgana and female sexual freedom
Five treats for Fantasia fans
Crazy Samurai Musashi, The Oak Room, Time of Moulting, Fried Barry and Slaxx
Fantasia through the looking glass
Mitch Davis on the challenge of taking the famous Montreal festival online
Tales from the crematorium
Ryan Spindell on Clancy Brown, Caitlin Custer and The Mortuary Collection
Never say die
Ryan Spindell on anthology films and the willpower it took to make The Mortuary Collection