Cinema has seen many takes on the Pygmalion myth, but few from the statue’s point of view. Bringing the theme up to date by way of an inflatable sex doll who comes to life, Hirokazu Kore-eda’s multi-award-winning 2009 film has become a modern classic. Though the subject matter may sound exploitative, it is anything but. The film takes an oblique look at sexuality whilst exploring many other aspects of contemporary society and what it means to be alive.

What is it that brings the doll, Nozomi, to life? There’s a mystery there, but as the film notes, there’s a mystery to the experience of being alive more generally. For some unknown reason, Nozomi (Bae Doona) has acquired what the English subtitles translate as a heart. The Japanese term, kokoro, is a little more expansive, taking into account elements which might be described as soul, mind and will. It begins with the blink of an eye. Without her owner noticing, Nozomi begins to make subtle movements and to observe the world around her. She is enchanted by the light which filters through the bedroom window, by the sound of a wind chime just outside. Whilst her owner is at work she rises, dresses, wanders outside and begins to explore.

This is a film with layers and layers of meaning. Its central narrative is wisely kept simple. Nozomi doesn’t have a lot of ambition. She just wants to engage with the world, observe and learn. Before long, she has found work in a DVD rental shop – an emblem of mortality if ever there was one. Her wages allow her to buy a few things for herself, including pieces of clothing with appealing textures and colours, less obviously sexual than the collection of outfits which her owner has acquired for her. Her owner, absent from the house for long periods, takes a long time to notice her developing independence, like many a husband about to be surprised by a request for divorce. Nozomi gets to know the other people who live in her neighbourhood, and begins to fall in love with her co-worker, Junichi (Arata Iura).

Delicately scored by Katsuhiko Maeda, the early part of the film has a real magic about it, its sweet-natured heroine conveying an infectious sense of wonder. Even though she makes mistakes and sometimes innocently manages to insult or worry people, the world seems to make way for her with simple kindness and generosity reminiscent of what is often afforded to children. This makes what comes later all the more devastating, when trust is betrayed, when wishes fail to come true, when Nozomi discovers, like many a naïve young woman, that some men will only ever see her as an object. Searching for understanding, she will confront her maker, like Blade Runner’s Roy Baty, finding something differently disconcerting. There is a suggestion that all of her suffering is simply a reflection of what any person might experience before finding true love, and that there is another struggling person out there waiting for her, but her heart, and the viewers’, will be broken first.

In traditional Shinto beliefs, it is love. and attention and respect, which can enable us to forge a connection with the spiritual essence of any object, and perhaps this is the secret of Nozomi’s kokoro. Throughout the film we see her notice and interact with other imitations of the human form: images on film posters, a statue, shop mannequins, a child’s doll. She learns to use make-up to cover up the seams which make her look different, yet at the same time viewers are invited to expand their definition of what is human, or a person, to encompass her differences, so that a scene in which she cleans a bodily insert following unwanted sexual contact is distressing to watch. Although Junichi is clearly aware of her difference from the start and doesn’t seem bothered by it, she is self-conscious around him, trying to hide little give-away signs.

All of this is made possible by an inspired central performance. Because she’s Korean and surrounded by Japanese people, Bae looks different to begin with (there is inescapable comment here on how Japanese soldiers have othered Koreans during various wars, something which has often contributed to sexual violence), but she is brilliant in her ability to inhabit a character who has very little facial movement and takes time to develop complex emotions. Her physical acting is impressive throughout, but especially in scenes where Nozomi loses her air and has to be re-inflated, so that only simple effects work is needed to make them believable and to show us what this experience does to Nozomi psychologically. As we are constantly made aware of Nozomi’s fragility, both physically and socially, Bae makes her so intensely alive that we understand what is at stake and why she deserves to live – important in a cultural context where weakness and disability have often been perceived as making a person less deserving.

Exploring themes of loneliness and isolation in the big city, as well as reflecting on the ageing process and mortality, Air Doll provides a fresh perspective on numerous issues in Japanese society, yet never loses its awareness of possibility. Hope is found in unexpected places. Beauty is present in small things. Nozomi’s kokoro is never more clear than when she is intentionally expelling air, discovering her voice. 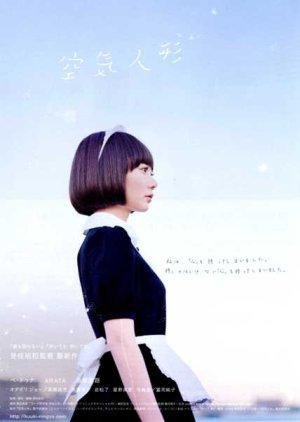 A blow-up sex doll develops a sense of self and begins to explore the world around her.