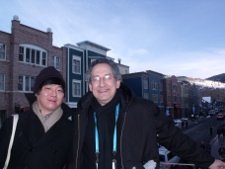 Sundance Day 2 was one of extremes, marked by my favourite film of the festival so far and my least favourite.

Taking all the positive plaudits - and I have yet to hear anyone say a bad word against it - was Win Win, the lastest feature from Station Agent and The Visitor director Tom McCarthy. I never cease to be amazed at the effortless way McCarthy sets up his character situations and handles multiple plotlines with remarkable finesse.

Win Win - a title which resonates more once you've seen the film, is at once a family comedy drama with hints of coming of age, with an unexpectedly refreshing high school sports plotline folded within it.

Paul Giamatti stars as Mike Flaherty an average family guy, with a less-than-prosperous solicitor's practice and an enthusiasm for wrestling that sees him coach the less-than-competent local high school team. When an elderly patient suffering in the early stages of dementia looks as though he will become a guardian of the State, Mike sees an opportunity to step in and take the guardianship fee himself, to end his money woes. Things get complicated, though, when the grandson of his client turns up on his doorstep with nowhere to go and a mother in rehab.

Easygoing and engaging, not to mention incredibly funny, McCarthy's dialogue is economical and smart, quickly establishing relationships and knowing when to keep information to a minium. He cleverly balances the more familiar tropes of the wrestling competition storyline with the small but significant human dramas that are going on around it. One of the things I particularly like about McCarthy's films is that they are filled with believable human characters, who may be flawed but are rarely fatally so.

In the Q&A afterwards, McCarthy said that he and his friend Joe Tiboni came up with the plot of the film together.

"I just had this idea about high school wrestling - a much undervalued sport in this country - so I called Joe. We've known each other since we were about 10 and I said, 'Do you want to develop this idea with me.' He said, 'Totally, I'm in... what do we do?' And we just started talking to see if we could think of a story that could come out of it. We were drawing on our own experiences of wrestling. I guess it was a very personal story in that way and a lot of fun."

It's something of a departure for Paul Giamatti to be playing such an upbeat family man - a fact that wasn't lost on the actor at the time he was offered the film.

"Paul Giamatti is a super guy and as good as an actor he is, he's actually a better person and leader on set," said McCarthy. "The guy has a tremendous work ethic and is just fun to be around. I've known Paul for almost 20 years now. We go way back, we met at film school together and we've been trying to find something for years and this just felt like it.

"I called Paul, he was finishing a movie and was flying back. I sent it to him and he read it on the plane and I went over to his house for Thanksgiving and said, so, what do you think? He said: 'Well, I really like the script, it's great. But I think there's one major obstacle challenge for you here - the dude's happy'. I said: 'But you can do it, you can do it. Show the world!' And he really did. It's nice to find a guy who's content in his life and not condescend to these suburban characters or show guys miserably trapped in this life. He's a guy who's living his dream, and is very happy it's just not all working in some ways."

On the subject of "not all working in some ways", The Ledge, I'm sorry to report barely works in any way whatsoever. An interesting premise, which sees a cop (Terence Howard), with a distressing back story of his own try to talk a man, Joe (Charlie Hunnam), out of taking the plunge. Told using flashback, it shows how Joe's affair with the wife (Liv Tyler) of his Christian fundamentalist neighbour (Patrick Wilson) has led to his current predicament. The problems begin, but unfortunately, do not end, with its cinematography.

Everything has an odd 'soft focus' look that is decidedly unappealing. The plot development clomps along and the acting surprisingly wooden from such an established cast. The device of swinging from past to the present on the ledge never really gels and all of the characters have far too much back story. It's as though writer/director Matthew Chapman doesn't have enough faith in his characters as they are, so he keeps ladling on more and more outlandish pieces of history. Believing that the gorgeous Ms Tyler was once a drug addict and prostitute is the very least of the film's problems. After 20 minutes, I was prepared to push the central character off myself.

Still, in the department marked What The Hell Do I Know, it's worth noting that it already has a US distribution deal with IFC.