"Don't use the brakes. Cars are made to go, not to stop!"

Michel (Jean-Paul Belmondo) is yelling at a taxi driver; it's part of a long stream of abuse so over the top that it would be hard to imagine the driver taking it seriously enough to feel offended. It's also a neat summation of Michel's attitude to life. But the English title of this film is a bit misleading, and puts a different slant on things. The original title, À Bout De Souffle, would be better translated as 'at the last breath'. Michel isn't simply hurtling through life for fun. He's barely holding on to his essential vitality, hurtling toward death.

Michel has killed a man. It's something we don't need to see, something that has already shaped him, and the film's amoral stance on it is part of what led to it being banned in several countries at the time of its release, though it's re-released in the UK with a PG certificate. All of its difficult, challenging content is thematic, and it's the kind of thing younger viewers may not get anyway. It's not clear that Michel gets it. He's an angry young man, carefully styling himself after Brando in A Streetcar Named Desire, full of little macho gestures so affected they make him look effete, though he's keen to assert the essential differences between men and women whenever he can. This involves distancing himself from his American girlfriend Patricia (Jean Seberg) at every opportunity, often with further abuse. Not the smartest thing to do when he's depending on her to keep his whereabouts a secret.

It's a tight little story by the great François Truffaut, working at a time when he and director Godard were the driving force behind the new French cinema. Developing the story, Godard has room to explore all sorts of interesting social conflicts: the changing nature of masculinity; the changing role of women; France's standing in the world (especially in relation to America and American movie culture); the cultural ethos behind the youth uprisings then affecting Paris (which Michel typifies without understanding, claiming he prefers old people); and the frustrated revolutionary tendency toward nihilism. Five years after Rebel Without A Cause, this takes on some similar issues in a very different way. It has none of that film's narrative artifice. Godard even shot it in a plain, almost documentary style, wanting it to feel raw. There he was aided by his young assistant director Pierre Rissient, a man already determined that as little as possible should intrude between the viewer and the scene.

That said, Breathless is a visually innovative film. It looks startlingly modern when viewed alongside other work of the period, partly due to Godard's use of jump cuts to pull us in and out of the action (and perhaps to illustrate Michel's distracted state). By contrast, the long climactic take verges on the surreal, bringing emotion back into focus after all those studied denials. There are some things our bold antihero cannot escape from. Patricia muses on the nature of freedom; Michel, by contrast, seems to have so much of the stuff that he is condemned by his own indecision.

What really makes the film work is the balance it strikes. In any other film, a character like Michel would dominate completely. Here there is aways a suggestion that Patricia is just as strong as he is. She's indecisive too, but for different reasons. Perhaps she loves him, perhaps he's too childish for that. Perhaps she's pregnant (here the two seem anxiously in search of a new adventure). Perhaps she's going to have a brilliant career as a writer - but would that be possible if she were to join her lover on the run?

Creating tension out of boredom (which often where the characters find themselves) isn't easy, but Godard has done a masterful job, and his witty script never struggles to hold audience attention, combining sharp one-liners with oblique insights into things perhaps unseen by his protagonists. This is just one of many reasons why Breathless remains a vital piece of cinema. Don't miss your chance to see it on the big screen. 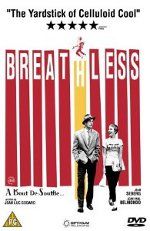 A young criminal hides out with a woman who can't decide whether or not she loves him. Plus read our exclusive interview with assistant director Pierre Rissient.

Rebel Without A Cause
Robinson's Place